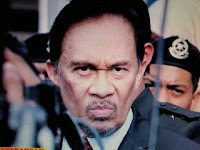 He may not be good at winning elections, but Datuk Seri Anwar Ibrahim is very good at whipping up his crowds of supporters and trying to persuade the world that he is a victim of injustice.
In fact, one might say that is his specialty, his greatest single talent.
Our self-proclaimed "Voice of Democracy" has been playing the martyr card very effectively for nearly a decade now. He has mastered the game.
The only flaw in his logic is the fact that by any standard Paktan Rakyat lost the election.
Barisan Nasional may not have done as well as hoped for, but we do not believe that it stole an election in which the Opposition improved its numbers in Parliament, held on to three state governments, and made inroads in Borneo and Johor.
In any other mature democracy, there would be no credible discussion or debate over a result with a margin as wide as 133 seats for the winner and 89 seats for the losing side.
Even if a few seats may have been won by BN with a couple of thousand votes (which did not seem to bother Pakatan when they were on the winning side) there is no way one could credibly argue, as Anwar does, that 30 seats and the entire national election were "stolen."
But that kind of simple logic does not bother Anwar. He has made no secret of his views, and has repeated them in recent months, weeks and days. And he repeated them again at Kelana Jaya Stadium again on Wednesday night.
Anwar's post-GE13 strategy is as clear as the pungent aroma of a durian: it is a demagogic attempt to replace electoral defeat with rabble-rousing propaganda, and perhaps even worse.
The truly significant part of Wednesday's protest was not the inflated claims by Opposition-friendly portals about how many people turned up. (Malaysian Insider first said the crowd was 50,000, Malaysiakini then said it was 80,000, and then a few minutes later, as if by magic, Malaysiakini increased its estimate to 120,000.)
The truly significant part of Anwar's remarks was not that he showed himself yet again to be a powerful public speaker, a cynic and a firebrand – that much we knew already.
Nor was it the impossible and illogical claim he made that every Malaysian wants BN to fall. Really? Then why did nearly half of all voting Malaysians express their opinion that they wanted BN to win?
Nor was there any surprise in Anwar's well-honed and repetitive claims of electoral fraud. We have heard that before, and often. In fact, long before polling day, he has been preparing a simple narrative in case of his defeat that can be summarised as "if I lose then there must have been fraud."
No, the truly significant moment came when Anwar pretty much gave the game away, and as the rally ended he told reporters that there is to be another rally on Saturday in Penang, while he is still considering holding one in Ipoh on Friday.
Anwar's strategy is clear now, but it is flawed.
He seems to believe that he can simply keep his supporters excited, hold more and more rallies and protests, keep making as much noise as possible, invent a so-called "People's Tribunal" together with his friend Datuk Ambiga Sreenevasan that attacks the Government, and hope that his clever and demagogic ability to get emotions soaring among his supporters will somehow force the Election Commission to decide that ok-lah, yes, indeed, Anwar, you are right, and so we shall declare invalid enough seats to hand you control of Putrajaya.
Back in the real world, here is the way it works in a mature democracy such as Malaysia: As EC chairman Tan Sri Abdul Aziz Mohd Yusof explained on Wednesday, any candidate who questions an election result can apply for a review of that result by making a petition within 21 days of the result being gazetted in accordance with the law.
Then, the losing candidate has a right to present whatever supporting arguments he or she wishes about fraud or illegalities.
If the High Court judge agrees, then the election result can be declared invalid. And then a re-election can be called.
Of course, Anwar has argued that he has no faith in the judiciary. But he seemed to have plenty of faith in the judiciary when it acquitted him in Sodomy 2.
So we can expect him to carry on in his quest. We hope and would like to assume it will remain a peaceful quest, even if noisy, and we hope that public order will not be threatened.
We think that ultimately Anwar's post-GE13 strategy will not succeed.
Posted by tunku at 1:46:00 PM