“A chartered accountant, Wahid has also led Maybank, a company under PNB’s portfolio, after spearheading the transformation of Telekom Malaysia. He had also led the UEM Group recovery process.

“When he was the Minister in the Prime Minister’s Department, he had also supervised several government agencies such as the EPU, UKAS, Statistics Department, Ekuinas, Talent Corporation, Teraju, and Yayasan Pendidikan Peneraju Bumiputera,” he said.

Najib also expressed his gratitude for Ahmad Sarji for having contributed to PNB during his 19-year tenure.

“PNB has achieved many successes, including implementing the Government’s mandate to improve the economic status of the Bumiputra and contribute to the nation.

“I hope Tun Ahmad Sarji will continue sharing his experiences and contributing the growth of the nation,” he said.

In a statement later, Wahid expressed his appreciation to the prime minister, the board members of Pemegang Amanah Yayasan Pelaburan Bumiputera and PNB’s board of directors for their trust in him.

“This is a huge responsibility to replace Tun Ahmad Sarji who has done a lot for PNB. I would like to thank Tun and the shareholders for their contribution to PNB. This appointment also means a lot to me as I have served in two companies under PNB,” he said.

Wahid had previously held the position of president and chief executive officer of Maybank from 2008 to 2013 and the director of Group Corporate Services in Amanah Capital Group from 1994 to 2001.

“I hope I will get continuous support in my new position and I promise to carry out my duty with honesty and trust,” he said.
Posted by tunku at 2:41:00 PM No comments:

The fight between DAP and PKR over the planned polls has turned nasty and is out in the open with leaders from both sides snapping at each other on social media.

Selangor DAP chairman Tony Pua vented his anger against what he called were “friends who left you feeling naked” only to be scolded by PKR’s legal bureau chief Latheefa Koya who said they should not “strip first and then complain”.

Pua sounded frustrated when he took to social media to complain.

“Sometimes, you wonder what type of friends you have. When they are in a crisis, you backed them to the hilt, come what may,” he said on his Facebook account yesterday.

“Then at a time where we would appreciate their support, they leak everything to the media first leaving you completely naked.

“Or announce to the whole world openly before they bother talking to us,” Pua said in what looked like a reference to PKR’s refusal to go along with DAP’s proposal for snap polls in Penang.

“First, it was to get back the so-called mandate of the people (which strangely you insist that you have not lost). Then you say it’s not about your leader’s (Penang Chief Minister Lim Guan Eng’s) charge.

“And now you are saying it’s about a referendum against (Prime Minister) Najib (Abdul Razak) based on the latest (US) DOJ (Department of Justice) exposé.

“Perhaps, you should all make up your mind first ... then consult with us and convince us,” she said.

“Do not expect PKR to ask ‘how high’ whenever DAP screams ‘jump’,” she added.

Latheefa also questioned who was the first to publicly announce the possibility of snap polls without consulting other coalition partners.

She also noted that DAP had made a unilateral announcement declaring Pakatan Rakyat dead.

Fahmi entered the fray by saying the two Permatang Pauh by-elections, in 2008 and 2015, were centred on PKR de facto leader Datuk Seri Anwar Ibrahim and that PKR had consulted with DAP and other Pakatan Rakyat leaders on the 2014 Kajang by-election.

He said these were single-seat by-elections where the immediate impact was only on PKR.

Syerleena, however, retorted that her party only found out about the by-elections when it was published in an online media.

She pointed out that the Kajang by-election did not involve just a single seat, as it anticipated a change of the Selangor Mentri Besar.

“This has huge implications, almost as big as holding a state election,” she said.

Syerleena, who is also Penang Island City Council (MBPP) councillor, claimed that despite the lack of consultation, DAP gave full and undivided support to the PKR leadership’s decision.

Johor Sultan: I didn’t make any statements against Najib

He also condemned those who had misused his name to comment on politics.

Sultan Ibrahim said the palace maintained a position of strict neutrality on all matters pertaining to national politics.

The Ruler said he came to know about the irresponsible posting being circulated in social media recently titled “Terkini Ringgit Jatuh RM4.4” (Latest – Ringgit Falls RM4.4), and stressed that no such statement was issued by him or his office.

“I regard this action as defamatory and reprehensible. Of late, there have been a number of ridiculous statements circulated on social media, with the impression given that these statements were issued by members of the royal family,” he said in a statement which was posted on his official Facebook page yesterday.

He cited a recent posting alleging that Johor Permaisuri Raja Zarith Sofiah Almarhum Sultan Idris Shah had ordered a ban on the solat and azan.

He said that he regretted that there were those who misused social media to seek attention.

“Any statements issued by any member of the Johor royal family will only be done so through our official Facebook accounts,” he added.

Johor police chief Comm Datuk Wan Ahmad Najmuddin Mohd confirmed that a police report had been lodged on Tuesday over the blog posting.

“Initial investigations found that the Johor Sultan has never made any such statements as claimed by the blog,” Wan Ahmad Najmuddin said.
Posted by tunku at 10:02:00 AM No comments:

He claimed that the delay in PKR’s decision also showed that Lim had lost the confidence of the 40-member state legislative assembly.

“As suspected the PKR stand is that they are not convinced with DAP’s proposal to hold snap elections in Penang,” he said in a statement on Wednesday.

“This is a blow to Lim and DAP’s ego which have failed to get the support of their main coalition partner to hold an early state election.

"Lim's failure to convince his political allies to support his proposal has tarnished his dignity and credibility as a main leader in the opposition alliance," he said.

Zainal Abidin claimed the proposal to hold snap elections was a hasty move done in a panic by Lim and DAP after he was charged with two counts of corruption.

Looking at PKR’s meeting on Tuesday, he said it meant that 10 PKR assemblyman in Penang had yet to agree on the dissolution of the state assembly, while one PAS and 10 Barisan National assemblyman disagreed with the proposal.

“Therefore, we can assume that only 19 DAP state assemblymen have supported the proposal as of now,” he said.

Zainal Abidin said this meant 21 out of 40 state assemblymen disagreed and only 19 supported it.

“We can conclude that Lim has lost the trust of the majority of the Penang state assemblyman members,” he said.

He said this was because recording statements from witnesses involved a lengthy process.

“As I have said, the investigation is still ongoing. I know some people are trying to rush us.

“For some of the witnesses, it took us more than a week to record their statements as there are so many documents we have to check,” he said at the 36th Aseanapol Con­ference 2016 at the Marriott Hotel here yesterday.

“Don’t compare us to other orga­nisations. If you want us to do a good job, let us do it properly,” he said.

Asked on the details of the investigation, Khalid declined to elaborate saying it might send the alleged suspects into hiding.

In Kuala Lumpur, Bernama reported that Communications and Multimedia Minister Datuk Seri Dr Salleh Said Keruak said the Govern­ment was transparent in any investigation, including those conducted by the Malaysian Anti-Corruption Commission and the US’ Federal Bureau of Investigation.

“We are not hiding anything. In fact, we will ensure that anyone who breaks the law will face appropriate action. This shows the Government’s transparency.

“It also sets aside the assumption that we are protecting certain parties,” he told reporters after launching Goxip.com, a website and platform for local and international fashion, here yesterday.

Last week, the US Department of Justice launched a civil suit seeking to seize US$1bil (RM4bil) worth of assets allegedly obtained using funds siphoned from 1MDB.

The suit is seeking to recover assets belonging to several high-profile individuals who are closely linked to the state investment arm set up in 2009.
Posted by tunku at 9:57:00 AM No comments:

Najib: Those named in DoJ lawsuits must clear their name 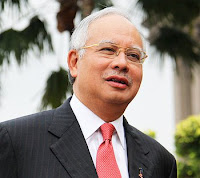 Those who are named in the United States' Department of Justice civil lawsuits leading to the freezing of assets linked to 1MDB must take responsibility to clear their name, said Prime Minister Datuk Seri Najib Tun Razak.

At the same, Najib said the government will ensure that no public funds were abused.

"This is our stand and let us allow this issue be settled via the judicial process. The government will give its full co-operation on the matter," he said on Monday.

‎The Prime Minister was speaking at an event to present offer letters to 1,100 village heads and village committee members to perform their Haj sponsored by 1MDB Foundation.
The US DOJ had filed civil suits to seize more than US$1bil (RM4.02bil) in assets allegedly linked to 1MDB.
Posted by tunku at 2:23:00 PM No comments:

The Penang Chief Minister, in a highly unusual move, is expected to present his party's decision to call for a state election to the PKR political bureau at its headquarters in Petaling Jaya.

The DAP central executive committee (CEC) met Monday night and decided in favour of an early state election and it needs to convince PKR to agree with the decision.

It is understood that many PKR leaders are not keen on the decision and tonight's session is expected to be lively with many questions thrown.

"DAP needs to convince us on the necessity of having such a exercise. They need to show us the numbers," said a top PKR official.

PKR is also banking on its deputy president and Selangor Mentri Besar Datuk Seri Azmin Ali to make a decision that reflects the opinion of the party.

It is understood that Dr Wan Azizah was also non-committal about going along with the radical decision and has asked PKR leaders from Penang to attend the political bureau meeting and give their feedback.

The snap election is widely seen as a move to validate Chief Minister Lim Guan Eng's position in the light of the corruption charges he is facing.
Posted by tunku at 4:13:00 PM No comments: