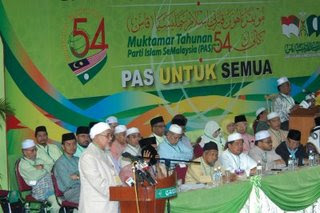 PAS general assembly in November is expected to be a stormy affair with several factions scrambling to dominate the leadership as the party loosening up its hard stand on Umno.
On one side, the party has the Kelantan faction headed by Husam Musa who was angry when he was pushed aside, dashing his dream of becoming the Mentri Besar or at the very least Deputy Mentri besar.

This group is known for its close affiliation with Parti Keadilan Rakyat (PKR) de facto chief Anwar Ibrahim which explains why former Kelantan Mentri Besar Nik Aziz Nik Mat bent the party’s stand on several matters to suit the party’s stand to that of PKR.

Then there is the Terengganu faction headed by party president Abdul Hadi awing with his ‘side-kick’ party secretary-general Mustapha Ali, who are fundamentalists but changes according to political needs.

The fundamentalists have been defending the party from the ‘invasion’ of Anwar’s friends into the leadership but they failed in 2009 when their candidate Nasharuddin Isa was defeated by Mohamed Sabu for the deputy president post.

And recently, emerging from the verbal conflict between PAS and DAP on  several Islamic issues, is the youth wing that called on the party leadership to stick to its original struggles.
The factions in the party have been at loggerheads but managed to keep their differences low in the wake of the general election and to project the good and close relationship with the other parties in the opposition pact of Pakatan Rakyat.

However, after the conclusion of the general election and with Anwar and DAP continuing questioning the election results through rallies, PAS is distancing itself and softening on its stand to Umno.

PAS is softening up given the change in the political landscape that cut through racial lines as reflected in the result of the general election despite needing the Chinese votes for the party’s survival.

The party leaders, particularly the fundamentalists are wary of the need for Malay dominance which form the basis of the party’s pillar although Islam is the party’s brand and struggle.

Given such a background, the party assembly to be held this November is expected to be stormy as delegates pick the leaders for the next three year-term and at the same time chart the party’s path.
Top on the list to be debated with be the co-operation with Umno in the name of Malay unity as the party youth wing intends to explore the possibility of a closer and more understanding relationship.
The youth wing leaders and members have been vocal against DAP’s Karpal Singh and Lim Guan Eng on several matters concerning Islam and its principles, especially when Karpal belittle the role of PAS Ulamak Council that has kept the party on its Islamic track against the wishes and desires of Anwar and DAP.

Then the party election where Anwar’s friends are expected to contest all posts except the president post where Husam is the main player in leading the group, this time replacing Mohamed Sabu with himself as candidate for deputy president.

It will be a stormy assembly where the several factions are expected to collude and the assembly taking the party to a new path – maybe with Umno or on its own.
Posted by tunku at 12:30:00 AM