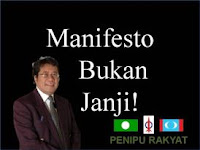 Sultan Sharafuddin Idris Shah has reminded Mentri Besar Tan Sri Khalid Ibrahim and the newly- appointed state executive councillors to fulfil all promises made in the Pakatan Rakyat election manifesto.
The Sultan said pledges made in the manifesto prior to the May 5 polls must be fulfilled to ensure peace and harmony in the state.

"The manifesto is a promise to the people. Thus, it is very important to fulfil them.
"Yang Berhormat must not forget that the people have placed hope on them for a better and harmonious life.
"Representatives must also realise that the position in the Selangor executive council is entrusted by the people," he said in his speech after the swearing in ceremony of 10 councillors at Istana Alam Shah.

Saying that the rakyat were constantly monitoring current issues via various platforms, Sultan Sharafuddin cautioned the councillors that they must perform their roles with responsibility and not confuse the people.
"The role of the mentri besar and the people's representatives are to develop programmes that would give an impact growth of the state.

"Each responsibility must be undertaken intellectually by putting the people's priority first," the Sultan said, adding that due consideration must be given to the development of the state.
Sultan Sharafuddin reminded the councillors to stay away from corruption, which he said would tarnish the image of the person and his or her party.

"All Yang Berhormat must not forget who they are serving. I do not want to see representatives promising the moon and stars during the campaigning period but are nowhere to be seen later," he said.
He also called for all politicians to put aside their political differences and work together for the betterment of the state.
Meanwhile, Datuk Munir Bani, the Sultan's private secretary, refuted allegations made by a Selangor parliamentarian that the delay in appointing the state exco was to accomodate Tuanku's wishes.
Munir said Khalid had submitted the exco list on May 20, and the Mentri Besar left the country after that for medical treatment and only returned on May 27.

"I hope to get the cooperation of online writers and bloggers to not drag the palace, especially the Sultan, into any matter without verification," he said.
Posted by tunku at 4:28:00 PM