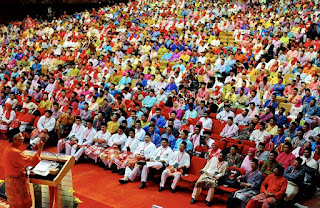 Some 146,500 Umno delegates from 161 divisions nationwide will elect the party leadership at year end in line with the constitutional amendments.

Umno information chief Datuk Ahmad Maslan said the election this time is more democratic as the election of leaders are not in the hands of a group of delegates.

"Previously, only 2,500 delegates determined the party leadership but this time it has been increased to 146,500. The election starts at branch level."

Ahmad believed that the Umno election of office bearers would not become chaotic as what happened in the election of opposition parties.

Umno also made membership fees once in a lifetime, empower Youth, Wanita and Puteri wings to approve new members and recognise the contributions of division secretaries.

Ahmad said the amendments were part of the Umno transformation process to make the party more democratic, transparent and inclusive.

He reminded all quarters to take heed of what happened during the 13th general election (GE-13).

"We do not want another split among Umno members. It is important to win back the hearts of the people and strengthen the party machinery to meet future challenges."