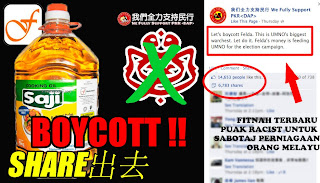 The campaign ‘Buy Chinese Last’ is now being promoted by Bumiputera despite of being heavily criticized by the Chinese. Pro-opposition Chinese and English media seem to be active in criticizing the actions of Malays who boycotts Chinese products.

As they mention that the Chinese would not be affected by this campaign, they kept on hitting the government, especially leadership, for not stopping the campaign. At the same time, they also showed cockiness, demanding Malays to not work for them if they are really boycotting their products. Some of them even bragged by saying that they are the biggest taxpayers in the country and that the country might have not gone anywhere without them.

They have never been oppressed by the government and the Malays have never been racist towards them. Where did they gain all of their luxuries and able to pay their taxes if it's not because of Barisan Nasional's policy which has never desert them? And where have they gotten customers if its not from the majority race in this country? Where they did they get their workers if it's not from the multi-racial rakyat, especially those working under them?

Not that we are not aware that their lazy and stupid race are the ones getting hist posts and salaries in companies they own while smart Malays will always be put aside based on the excuse that Malays are lazy and stupid. This is the usual answer for the Chinese to defend themselves over their racist attitude, It is now time for Malays to counter their excuse.

Not that we don't know that no matter how stupid Chinese who applied for a job in factories, they  would be given office work. But Malays with a diploma will always end up being 'production operator'.

It is a normal thing for private sector is we see how the Chinese who are not IT-savvy are given executive pay while Malays who are able to prepare financial reports and making presentations to clients are given salaries that are a lot lower than those stupid Chinese kids. Besides that, looking at how stupid Chinese bosses who do not know how to read reports in English depend on their Malay secretaries to do their job for them is a normal thing in the private sector.

Because of their stupidity, Chinese are mostly the ones who end up in private universities because to be in it, qualification is not that important as long as the money is there. That is why most Chinese rush to open saloons and night clubs so that their stupid girls could work. For being stupid, the Chinese had to depend on wisdom of other races which they would later stab in the back.

I am speaking based on my experience of working at six companies led by the Chinese. In these companies, despite of being owned by foreigners, if the leaders are Chinese, there is no way that Malays could be in the higher management office, they would often end up in Human Resource or 'Government Affairs'. This is a normal thing.

Fact is, Malays and Chinese are the same, some are stupid some are smart, some are lazy some are hardworking.

To see whether they are smart of stupid, ask any Chinese from those private universities to discuss anything about general knowledge, history and thoughts. Most of those who think they are smart would not know anything other than counting money and profit.

And for being stupid, that is the reason why the Chinese' Red Bean Army sent hundreds of comments on articles regarding ‘Buy Chinese Last’ in the internet and each of them do not have any profile pictures. (Do they think other are as stupid as they are, not knowing that it is the work of the Red Bean Army?) Thing is, if we are to look at comments made for articles in other websites, most of them do have profile picture.

That is why, there is no need for the Chinese to be proud over their stupidity, Do know that arrogance only reflect stupidity.

Criticizing the Buy Chinese Last campaign shows even more stupidity. Because, everyone knew that the Chinese have been boycotting Bumiputera products for ages. Not that we are not aware that shopping malls controlled by the Chinese do not accept bumiputera products with the excuse that the quality is bad and various other reasons.

Some cases regarding this include ‘Kelantan Delight’ in KLCC and how they oppressed bumiputera businessmen in Alamanda. The same thing goes to Subang Parade and all commercial areas controlled by them.

Not just that, they cannot bear seeing the success of Malay products, they would do as best as they can to sabotage it. Gardenia is one of the products which the Chinese hate the most because of their hate against the owner, Tan Sri Syed Mokhtar, only because he is a Malay Tycoon. They somehow claim that he has been getting special rights and chance from the government only because he is a Malay, thing is, there are more Chinese tycoons out there because also get the chance to monopolize a lot of things from the government, and that is okay?

Sometimes, the Chinese acted first by purchasing or distributing products on behalf of Malay manufacturers and they would ruin the products bit by bit until the business goes down, before they take over the manufacturing process.

Question is, why would the Chinese sabotage bumiputera products and hate that one Malay tycoon? Answer is, none other than because they know that Malays have the potential to move at the same as as they are.

That is why, even though they often promote the importance of healthy competition, their actions of boycotting and sabotaging bumiputera products only show that they are afraid to compete. Even though they know that they will not be poor if they have to compete with other races, they intentionally do not want other race to share the same luxury.

Thus, even though I do not want to lead anyone towards racism, but I fully support the campaign of boycotting Chinese products. Not because of racism, it is only to support 'healthy competition'.
Boycott needs to be countered with boycott. Period.
Posted by tunku at 7:51:00 PM

No need to justify the boikot barangan cinapek kempen, it is our conumer rights

it is also self-preservation, they made the first move

She documented the racist chinese sneaky marginalisation of the Singapore Malays

all UMNO leaders must learnfrom her research especially Najib

Tunkuaisha. I like your article about this chinese boycott. All your story is true and still happening. I work with 5 chinese company and sadly their thinking toward us malay are so terrible. And they are also lazy same like us but the only different is they get higher salary compare to us...and the talk a lot and love to browse facebook or youtube more then us.we dont browse because we have to do their job that suppose to be theirs.

You are absolutely right. The Chinese are the most racist people in Malaysia. They are afraid that the Malay will overtake them one day in Malaysia, so they get guidance from Singapore on how to break up the Malay and rule them. This is exactly what the DAP is trying to do, stir up racial sentiments, downgrade the Malay and take control politically. The sad thing is that the Malay could not think very hard, they blindly follow the opposition and try to blame the government for everthing. Whatever the government is doing is all wrong, even though they know that they have benefited as well. They are an ungrateful lot, they have taken over Singapore and now their ambitious is to create unstability and try to overthrow the Government. Look at how they display our Malaysia flag upside down in Taiwan and try to get sympathy from Singapore government with their demonstration. Bumiputra should wake up and do not follow blindly Anwar's and DAP's agenda. Their are destroying your country and your rights.