Pro-Pakatan Blogger Challenges Anwar To Be A Responsible Leader 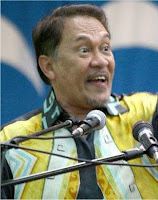 You know the knives really are out for wayward Opposition leader Datuk Seri Anwar Ibrahim when even his pet bloggers seem to have turned against him.
The latest to lash out is known pro-Pakatan writer CT Ali, who has taken to his column in Free Malaysia Today to write a scathing piece about Anwar's widely criticised policy of calling for civil unrest.

Ali describes himself as a reformist who believes in Pakatan Rakyat's philosophies; however he is clear in his article that whatever Anwar is currently preaching has no place within that framework.
Opening briefly with the usual pro-Opposition homilies on Barisan Nasional, Ali moves on swiftly to ask whether Anwar "is up to the challenge before him – that of being leader of the Opposition against a minority BN Government."

Ali challenges Anwar to practise what he preaches and bring good governance to the forefront of Malaysian politics. But he does not skirt the issue that Anwar's current path shows a desperate man playing a dangerous game.

He supposes that "it is not a matter of 'if' but 'when' Anwar will be arrested" due to his recent behaviour "if not for his call to topple the Government through massive street protests, then perhaps for his alleged involvement in Lahad Datu."

Cuttingly Ali describes Pakatan's threats as "hollow and more often than not [they] border on the comical, given that they have yet to put their own house in order," attacking PAS for its choice of members who he claims might not best serve the coalition's interests.
"The wisdom of going into a confrontational stance with BN carries with it more risks to Pakatan than to BN," he warns.

He goes on to say he is "troubled" that the supposedly non-partisan Bersih appears to be anything but and has "increasingly shown itself to be in Pakatan Rakyat's camp".

Perhaps the most interesting point that Ali raises is that even though the Opposition in theory grew stronger at GE13, the reality is something else entirely and "Pakatan Rakyat has yet to get their act together" as bitter infighting in PKR continues.

Ali clearly feels that Anwar is in trouble. And the longer he remains on his current path, the longer Pakatan Rakyat risk similar woes. Ali's message for Pakatan is to "move forward".

Echoing Lim Kit Siang's words about GE14 this week, Ali says the Opposition should being "working immediately in the 133 constituencies they failed to win – a tedious exercise indeed – but surely that would be the more responsible thing to do."
Posted by tunku at 3:30:00 AM