Govt Did Not Interfere In Arrests Of Opposition Leaders, Activist - Muhyiddin 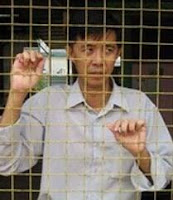 The government did not interfere in the arrests of certain opposition leaders and an activist on Thursday as the matter came under the jurisdiction of the police, said Deputy Prime Minister Tan Sri Muhyiddin Yassin.

He said the police must have had the grounds to arrest them based on available evidence and provisions of the law.

"We do not want to interfere because they (police) found there was basis to remand those arrested.

"When the investigations are completed and enough evidence is compiled, it is up to the authorities to take action because the people are beginning to get worried that no stern action is being taken over the actions of certain quarters, no matter who they are," he told reporters when asked to comment on the arrests of PKR vice-president Tian Chua, activist Haris Ibrahim and PAS member Tamrin Ghafar under Section 4(1) of the Sedition Act 1948.

Speaking to reporters after receiving a briefing on tourism in Phuket by Thailand's Tourism Authority (TTA) Thursday, Muhyiddin denied the arrests were politically linked and believed the police's action was to prevent chaos from occurring in the country.

He said no one should be allowed to disrupt the peace and harmony in the country and cannot think they could do what they like without considering the wellbeing of the population at large.

Asked if the arrests would be made political fodder by the opposition, Muhyiddin said the police need not be afraid if they actions were taken according to the law, irrespective of who broke it.

"What is important is the people want to see the authorities act firmly towards maintaining peace and security," he said.

On the opposition still disputing the outcome of the general election (GE13) on May 5, Muhyiddin reminded them that Malaysia did not practice the 'law of the jungle' and that there were proper avenues to seek reddress if they were not satisfied.

Asked if the arrests of the trio would put an end to the plans by the opposition to hold more street demonstrations to protest the results of GE13, he said they should respect the democratic process and try their luck in the next GE as what the people wanted now was to see the Barisan Nasional (BN) deliver the goods.

Also present at the meeting were Phuket governor Mitrai Inthusut and Tourism Malaysia director-general Datuk Mirza Taiyeb.
Posted by tunku at 6:00:00 AM