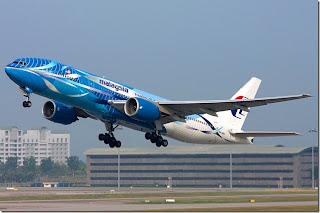 Malaysia Airlines (MAS) flew home a Malaysian mother and her 14-month-old daughter, who were earlier prevented from boarding a flight from another carrier, after getting the doctors to certify that the girl was not a health risk to passengers.

Izan Suhaila Mohd Ali, 36, and Mariam Sofea Mohd Reza were held back at Ho Chi Minh airport in Vietnam on Saturday night after their daughter was suspected of having symptoms of a contagious disease.
MAS chief executive officer Ahmad Jauhari Yahya (pix) said MAS staff had taken Mariam to a doctor as it was a standard procedure for all passengers with symptoms of contagious disease to get a fit-to-fly certification from a doctor.

"This is to ensure that no one passenger puts the health of another passenger at risk," he said in a statement on Monday.

Ahmad Jauhari said the doctor examined the baby and confirmed she was no longer contagious and was out of the incubation period, while the black spots on her body were actually just dry scabs.
"Immediately after that, MAS worked on preparing the travel documents for Izan, Maryam and two other relatives. They were booked onto flight MH759 that departed Ho Chi Minh airport yesterday, so that they would not have to spend another night in that city and incur more costs," he said.
Ahmad Jauhari said the MAS staff from the city also drove the family back to the airport from their hotel and as they reached the airport, the airport services team had prepared all the necessary documentation to ensure fast check-in.

"A ground staff was especially assigned to escort the family through Immigration & Customs. This was important as there was a query on the immigration stamp in their passports due to the previous day's incident," he said.

Izan and her family managed to board MAS flight MH759 and departed for home at 4.40pm.
Ahmad Jauhari said: "We are glad that the team in Ho Chi Minh City displayed 100 per cent Malaysian hospitality in this situation."

He said the ability of the team to act beyond their normal duties was to be highly applauded and it was also commendable that they did not break any rule of the standard procedures.
MAS flies three times daily to Ho Chi Minh City.
Posted by tunku at 1:30:00 PM