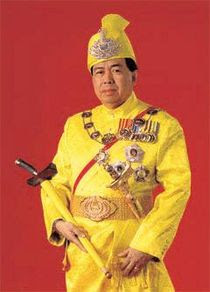 "It is rude to make such a statement by questioning the powers of Mais, as it is also like questioning my powers as head of the religion.

"This is not the first time Khalid Samad has questioned issues pertaining to the executive powers of the council and the State Islamic Enactment which he thinks is obsolete," Sultan Sharafuddin said in his address before launching the Sepang town mosque Tuesday.

Labelling Khalid as "ignorant towards state Islamic laws and Mais' role", Sultan Sharafuddin urged him to study the history of the state and its laws before making any comments that could cause a stir among Muslims.

"I hope he is more careful when issuing statements that touches on the roles of the Sultan and Mais," he said.

The Sultan also stressed that Mais had guaranteed the rights and freedom of non-Muslims.
"Mais respects the non-Muslims as stated in the Federal Constitution.

"Any action by Jais (State Islamic Religious Department) and Mais is to champion the rights of the Muslims without disturbing the non-Muslims," he said.

He also urged politicians not to use Islam for their own political mileage, adding that they should instead issue statements that would ensure the purity of the religion in the country.

Last month, following the refusal by Jais and Mais to return the seized bibles to the Bible Society of Malaysia, Khalid had suggested for the executive powers of Mais to be reviewed.

He said Mais, being the religious advisory council to the Sultan, must be "studied" again to ensure it did not taint the Malay Rulers institution.

Separately, Sultan Sharafuddin called for all Muslims to practise moderateness during the Ramadan, advising them not to fight and slander each other.

"If these continue to happen, the Malays will be extinct and do we want this to happen in our own country? Imagine who is going benefit and who is going to lose from this," he added.
Posted by tunku at 12:30:00 AM