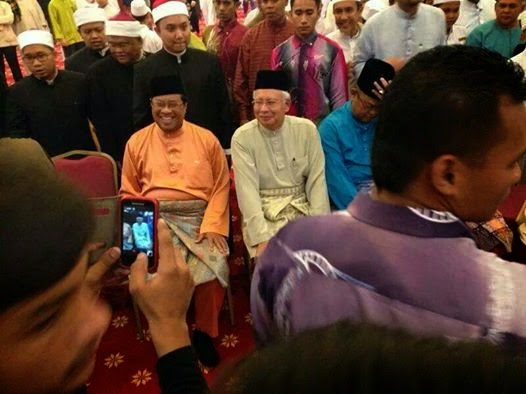 Tan Sri Khalid Ibrahim, who is facing pressure to relinquish the post of Selangor Menteri Besar, tonight received a morale booster from the Prime Minister who admitted that they could work together despite their differing political ideologies.

Datuk Seri Najib Tun Razak said: "Although there are differences, we can cooperate in many other areas."

The Prime Minister also thanked the Selangor Menteri Besar for agreeing to attend the breaking of the fast together with the people of Selangor organised by the Selangor Federal Development Department at the Tengku Ampuan Jemaah Mosque at Bukit Jelutong, here tonight.

About 2,000 Selangor people attended the gathering which began with the breaking of the fast, followed by Maghrib, Isyak and Terawih prayers.

"This (Khalid's presence) is a good sign, I believe," said Najib.

Over the past few months, Abdul Khalid had been under pressure from various parties including the Parti Keadilan Rakyat (PKR) leader himself to relinquish the post of Selangor Menteri Besar.

The 'Langkah Kajang' move which was seen as an attempt to topple Abdul Khalid earlier had reappeared in the PKR especially after he had failed to defend his post as head of the PKR Kuala Selangor division in the party election recently.

Abdul Khalid was appointed as Selangor Menteri Besar after the opposition pact won the 12th general election in the state in 2008.
Posted by tunku at 9:27:00 AM