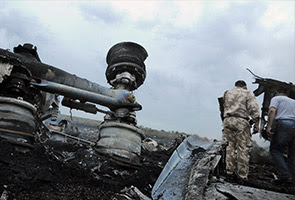 Pro-Russian rebels in eastern Ukraine recovered objects which appear to be the black boxes of downed Malaysia Airlines MH17 and are willing to hand them over to international investigators.

"Jet parts resembling the black boxes were discovered at the crash site," said Alexander Borodai, prime minister of the self-proclaimed Donetsk People's Republic, adding that they would be handed over to "international experts if they arrive".

Borodai also said bodies which have been removed from the crash site will be kept in refrigerated carriages on a train near the scene "until the experts arrive".

He said his teams had taken the corpses away from the crash site "out of respect for the families" and because "it is becoming inhumane in these conditions".

"We couldn't wait any longer because of the heat and also because there are many dogs and wild animals in the zone," he added.
Posted by tunku at 12:54:00 AM