#MH17: Two planes with victims' remain arrive in the Netherlands 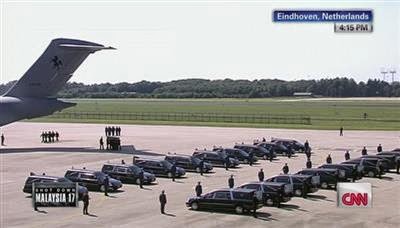 Two planes, a Dutch army C-130 and an Australian military C-7, carrying 40 bodies arrived at Eindhoven airbase in the Netherlands.

The arrival of the planes was met with a trumpet salute and a minute's silence.
All church bells in the Netherlands will ring at 1355 GMT (11.55pm Malaysia) in respect for the deceased.
Posted by tunku at 10:37:00 PM