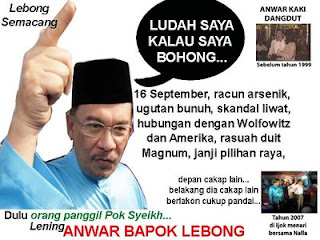 KUALA LUMPUR: Independent Kulim Bandar Bahru MP Zulkifli Noordin Thursday claimed that Datuk Seri Anwar Ibrahim had told him and other PKR MPs that he had seen a sex video that involved Bukit Lanjan state representative Elizabeth Wong.
He said the PKR adviser made the claim during a briefing at Level 14 of the Parliament building last year.
“I was at the briefing where he told us that Wong had to resign because there was a sex video of her.
“That was why after the briefing I made a statement urging the Selangor Mentri Besar Tan Sri Khalid Ibrahim to fire her,” Zulkifli told a press conference at the Parliament lobby.
Bayan Baru MP Datuk Seri Zahrain Mohd Hashim who was also at the press conference said he attended the same briefing and heard the same thing from Anwar.
“He told us he had seen not only the photos (of Wong in compromising positions) but also a video,” he said.
He also challenged Anwar to take an oath on the matter at a mosque and that he would do the same.
Earlier, Anwar got into an argument with reporter when the letter kept pressing the Opposition Leader to state when he was going to show the evidence on his claims that former PKR MPs and state assemblymen had received RM2mil each when quitting the party.
The reporter repeatedly asked Anwar when he would show the evidence of his claims during the PKR adviser’s press conference at the Parliament lobby. His persistence prompted Anwar to ask him which organisation is he attached to.
When he replied that he works with RTM, Anwar told him to “ask your minister why no action had been taken on the V. K. Lingam case.”

tunku : forget about asking the moron taking oath at a mosque, he don't even dare to take oath for his sodomizing case what more watching elizabeth wong's porno.anwar is the biggest moron who likes to lie almost everything, whenever he open his stinking mouth, he lies.today he acted like a moron when he can't even answer rtm reporter's question diplomatically.this is not the first time he acted this way.whenever he is cornered and have no answers, he will attack the reporter's employer. what action can be taken on vk lingam? for lobbying? if vk lingam had bribe someone than action can be taken against him.now that you said that you have the evidence of the mps receiving 2 million, go and make police report.why you have to wait? WHAT A MORON.

watch anwar acting moron with a reporter.
Posted by tunku at 12:10:00 AM