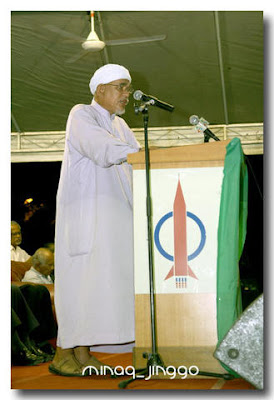 KOTA BAHARU, June 11 (Bernama) -- PAS president Datuk Seri Abdul Hadi Awang has admitted that the party is unable to implement Islamic law in pakatan states.
"PAS which rules Kelantan and Kedah and forms the Selangor and Penang state governments will try to implement Islamic law within the states' jurisdiction," he said when opening the party's congress here on Friday.
Hadi blamed PAS' failure to implement Islamic law on pressure and obstacles posed by the federal government.
However, he did not reveal the types of pressure and obstacles other than claiming that the federal government did not respect the spirit of federalism.
"They also showed disregard for the agreements signed by seizing the oil royalties in Kelantan dan Terengganu," he said.
Hadi's policy address themed "Islam Fair For All" was full of rhetoric claiming that Umno and Barisan Nasional had mismanaged the country.
He also claimed that the Malays did not practice the Muslim way of life and blamed Umno for introducing an Islamic concept influenced by colonialist elements.

tunku : what can a brainless leader like hadi awang can fools the people.he was the want who said that hudud law will be implemented the very next morning if pas rules trengganu but when they won, he said hudud is not the main thing.now again, he's shifting all the blames on Umno and the federal government.Islam fair for all but pas is not fair to Islam any longer.for them Islam is not the main struggle now.they are just puppet and toy for lim kit siang and anwar ibrahim.
Posted by tunku at 12:27:00 AM

Can't you anticipate that for befriending the satan?