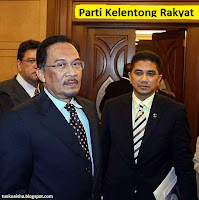 KUALA LUMPUR, June 28 (Bernama) -- Parti Keadilan Rakyat (PKR) advisor Datuk Seri Anwar Ibrahim has insisted that there is no hidden agenda in vice-president Mohamed Azmin Ali taking over as the party chief in Selangor from Menteri Besar Tan Sri Abdul Khalid Ibrahim.
Anwar said the replacement was undertaken due to Abdul Khalid's heavy workload.
"At first I disagreed but after several discussions, we saw that he needs to share the burden, he needs the political programmes to be handled by someone else," he told reporters at the Parliament lobby here on Monday.
The switch was announced yesterday by PKR president Datuk Seri Dr Wan Azizah Wan Ismail along with the appointment of Datuk Zaid Ibrahim as PKR Federal Territory chief with immediate effect.
On speculation that 15 PKR members of parliament was pushing for Khalid's resignation, Anwar said any move to oust Khalid should go to him first.
"There was never any discussion on the matter at any level to express such demand. If there was a move to oust Khalid as the Menteri Besar it should go through me first as I have some influence on the matter, but the issue has never cropped up," he added.
Meanwhile, Mohd Azmin said the new arrangement would be more effective for the state and he supported Abdul Khalid as the MB.
"Our relationship has been very cordial, there is no problem, I work closely with Tan Sri Khalid. My position remains that he should stay as menteri besar and I will give my full support to Tan Sri Khalid.
He also said he respected the appointment of Zaid as Federal Territory chief.
"That is not my decision. I think he is the right person to lead Wilayah," Mohd Azmin said.

tunku : the moron anwar is right, there is no hidden agenda on azmin's appointment.it's an open agenda to replace khalid with azmin as mb if pakatan retain selangor after next GE.it is best for khalid to resign as he is like a captain without a ship now.he will be a MB with less power and no control of the party in the state.the moron anwar telling the world that the replacement was undertaken due to khalid's heavy workload, why not make azmin as the deputy of khalid so that he can help khalid? pkr going haywire.as a MB, khalid should be at least the state deputy chief if not the chief but he is nothing now.he is a MB with no value.
Posted by tunku at 12:00:00 AM