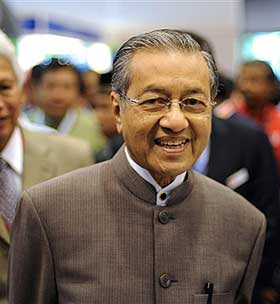 PUTRAJAYA, June 23 (Bernama) -- Former prime minister Tun Dr Mahathir Mohamad described as baseless the claims that Umno tries to attract ulama into the party to compete with PAS.
Dr Mahathir said ulama had been with Umno from the beginning but later formed their own party, PAS, when they were not nominated to contest for posts in the party.
Thus, in principle, he said, PAS was Umno's splinter party because it was set up by former Umno members.
"Umno has always had ulama as its members; it's only that they did not distinguish themselves as much," he told reporters after presenting prizes for the winners of the Perdana Leadership Foundation education project here Wednesday.
Dr Mahathir was asked to comment on rumours that former Perlis mufti Dr Mohd Asri Zainal Abidin and a group of ulama would join Umno on Friday, giving rise to talks that Umno was trying to attract ulama into the party "to be on par with PAS".
In KANGAR, Umno Supreme Council member Datuk Seri Dr Shahidan Kassim said the interest shown by ulama towards Umno was a healthy development.
He said that about 40 ulama with PhD credentials, including two from Perlis, would hand over membership application to Umno president Datuk Seri Mohd Najib Razak on Friday.
Shahidan declined to say, however, if Dr Mohd Asri was one of them.
"Whether or not Dr Mohd Asri joins Umno on Friday, he will still be my friend," he said.

tunku : that is the difference between pas and umno.umno's ulamas are reasonable and never claim that "we are the ulamas" where else pas , even people like mat sabu claiming they are the ulamas.most of the pas leaders carried themselves as ulamas when they are not.people like nik aziz,teaching hatred among Muslims, where else in Islam we should not hate each other.as for me, it's better for dr asri to stay out of politics.i would prefer he joins pakatan than joining Umno.
Posted by tunku at 12:00:00 AM