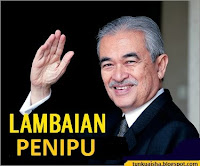 Up To The Government To Revive Bridge Project - Abdullah

KEPALA BATAS, June 27 (Bernama) -- Former prime minister Tun Abdullah Ahmad Badawi said it is up to the government whether to revive its plan to build a bridge to replace the causeway connecting Malaysia and Singapore.
He said the government would know what to do.
"It's up to the government. This is a major project; the government knows what to do," he told reporters after opening the Kepala Batas Puteri Umno meeting, here Sunday.
He was asked to comment on the remark by the Sultan of Johor, Sultan Ibrahim ibni Almarhum Sultan Iskandar, asking the government to revive the plan to build the bridge.
The project was mooted by Tun Dr Mahathir Mohamad when he was the prime minister but Abdullah decided to scrap it in 2006.
In JOHOR BAHARU, the city was abuzzed over the sultan's remark, with many expressing support to the call for the revival of the bridge project.
Johor Baharu Umno Youth chief Khalid Mohamad said the people of Johor had been waiting for the bridge for so long.
"His Royal Highness' remark was timely and in line with the aspirations of Johorians," he told Bernama.
He hoped that the much-improved bilateral relations between Malaysia and Singapore would provide a conducive environment for the revival of the bridge project, which he said would ease the severe traffic congestion in Johor Baharu and surrounding areas.
Citing the recent Keretapi Tanah Melayu Berhad land swap accord reached between the two countries, Khalid said Malaysia and Singapore were able to agree on the matter because of the warmer relations.
Vice-president of the Johor, Federal Territory and Selangor-born Malay Association, Datuk Syed Hussein Al-Habshee said the Sultan of Johor's call for the bridge project showed that the ruler was in touch with the aspirations of the people.
"The Sultan of Johor truly cares for the people who wanted to see the construction of a new bridge," he said, adding that the bridge would bring about "multiplier effects" to the local economy.
The association, which has 3,000 members, also welcomed Prime Minister Datuk Seri Najib Tun Razak's reaction to the sultan's call, he said.
Najib had said that the government would look into the matter.

tunku : just look at this senile old man called pak lah the sleepy head.now he says up to the government because it is a big project but when he scrapped it he said that by law Malaysia can't build the bridge etc. this shows that he is a big time liar.he will be cursed the rest of his life.he has cheated the public with his propaganda when he scrapped the bridge project. because of him government lost billions.
Posted by tunku at 12:02:00 AM

Syed Hussein Al-Habshee ? siapa dia ni? he is not even a malay, merely an arab tribe from hadramaut but fighting so call for the malay for personal interest.