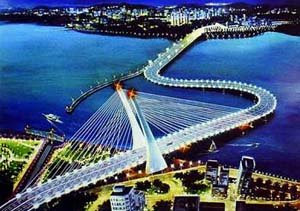 JOHOR BAHARU, June 26 (Bernama) -- The Sultan of Johor Sultan Ibrahim ibni Almarhum Sultan Iskandar has called on the government to reconsider reviving the bridge project to replace the Johor Causeway.
He said the causeway was very important to the people and the Johor sultanate since previous rulers had always be supportive of efforts to upgrade the causeway.
"Looking back, there is no doubt that the causeway is very important to the people.
"As such, the ancestors of my family since the late Sultan Ibrahim till my father, the late Sultan Iskandar had always been supportive of efforts to upgrade the causeway," he said when opening JB Sentral and launching the Kembara Mahkota Johor 2010 here Saturday.
The proposal to build an S-shaped bridge, widely dubbed the 'crooked bridge', was mooted by former prime minister Tun Dr Mahathir Mohamad but was scrapped by his successor Tun Abdullah Ahmad Badawi in 2006.
On JB Sentral, Sultan Ibrahim said he was confident that the people were delighted with the successful completion of JB Sentral although the main component of the complex, that is, a bridge had yet to be implemented.
He said the opening of JB Sentral was historic event as his late father, Sultan Iskandar had opened the Sultan Iskandar Building which housed the Customs, Immigration and Quarantine Complex on Dec 1, 2008.
According to Sultan Ibrahim, he himself was involved in the Sultan Iskandar Building, JB Sentral and bridge projects, which were approved in 2003, by offering his views. "When the government encountered a problem in finding a suitable site in Johor Baharu to relocate the residents of Lumba Kuda and Bukit Chagar flats, my late father gave permission for 27 acres of the Johor Sultanate land in Kampung Bakar Batu to be used to resettle the residents affected by the projects. "This is an indication of the palace's support to enable the projects to get off the ground in the interests of the people," he said.
While commending the federal government and state governments for the successful completion of Sultan Iskandar Building and JB Sentral, Sultan Ibrahim also expressed his pleasure as both projects were completed as schedule by Bumiputera contractors from the state.
He hoped more government projects would be awarded to Bumiputera contractors from the state as they had proven their ability to develop mega projects.
Sultanah Raja Zarith Sofiah Sultan Idris, Tunku Mahkota of Johor Tunku Ismail, Deputy Prime Minister Tan Sri Muhyiddin Mohd Yassin and Johor Menteri Besar Datuk Abdul Ghani Othman were present.

tunku : najib should really think about reviving the bridge project which was scrapped by the sleepy head pak lah. najib should listen to Sultan Ibrahim and it was also the wish of Almarhum Sultan Iskandar and the people of Johor.the bridge is very vital for Malaysia, especially for Johor.we don't have to tell again and again the benefits of having the bridge as everyone knows about it.we hope najib would be brave enough to build the bridge.
Posted by tunku at 12:20:00 AM

This should be the first thing najib should do after taking the premiership.

But he doesnt have the balls to do it.

You know what?.....Singa Pura would fight against this at all cause.

They believe that this project would kill their life line economy....Singa Pura port.

This would fully beneficial to our PTP and for sure 80% of loading to Singa Pura Port would go to PTP.

So now it is not only Johor interest but also our national interest to have the crooked bridge project continue.

Now we dont need to build a new RM800 milion parliament in putrajaya. So.... build the bridge Najib....

At least RM800 milion for the bridge can benefit for at least 1 milion people or more.

DS Najib, just do it.