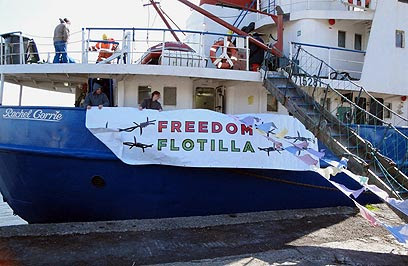 KUALA LUMPUR, June 5 (Bernama) -- The MV Rachel Corrie, the last of the humanitarian aid flotilla to Israeli-blockaded Gaza and with six Malaysian peace activists on board, was seized by Israeli naval forces at about 2.45pm (Malaysian time) Saturday, said Foreign Minister Datuk Seri Anifah Aman.
According to a Wisma Putra spokesperson, the vessel is being escorted to Ashdod port in Israel.
The 19 activists on board the vessel were reported unharmed, the spokeperson said.
In a statement here, Anifah said Malaysia strongly demanded that Israel ensured the safety of all the humanitarian activists on board the vessel.
"Malaysia also demands that Israel not to take any drastic and violent military action on the unarmed passengers of the Rachel Corrie," he said.
Anifah also said all the activists on board the Rachel Corrie should be given the necessary assistance to ensure their safety.
Anifah said Wisma Putra was closely monitoring the developments as there were six Malaysians on board the Rachel Corrie.
The aid mission is sponsored by the Perdana Global Peace Organisation (PGPO), a Malaysian non-governmental organisation.
The Rachel Corrie ship is named after an American woman who was killed by an Israeli military bulldozer in the Gaza Strip in 2003, while trying to protest a house demolition.
Anifah said Malaysia also called on Israel to ensure safe passage for the vessel to Gaza to deliver the humanitarian cargo.
In this regard, Malaysia urged the international community to persuade Israel to allow the humanitarian vessel to reach Gaza safely.

What the Israelis did was beyond the international law.

What exactly did Hitler see in Jews back then?