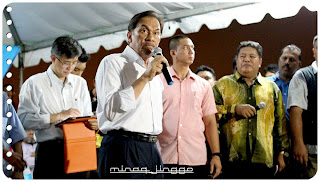 It has often been remarked that PKR is merely Datuk Seri Anwar Ibrahim's attempt to re-create his caricature of Umno for his and his family's political advancement. This, after all, is what drove so many of Keadilan's founders out of the party, and has infected the party through its internal wars, allegedly rigged elections and the allegations of cronyism and nepotism that haunt it to this day.
During GE13, it appears that the party grassroots finally noticed.

Presumably because of The Malaysian Insider's strong PKR favouritism and Malaysiakini's aversion to publishing negative reporting on Pakatan Rakyat leaders, Free Malaysia Today has become the web portal of choice for angry PKR grassroots to air their grievances. What began as a drumbeat of stories about the party grassroots and their anger at deputy president Azmin Ali has mushroomed into something larger.
For example, PKR's feat of losing net seats, including seats won in 2008, because of miserable candidate selection.

Although the list of criticisms has become familiar, this is the first time PKR's grassroots have made them: Anwar was so taken with his ceramah turnout and a handful of polls that he ignored the hard work in the kampung; good candidates were dropped in favour of Anwar's and Azmin's cronies; party president Datuk Seri Dr Wan Azizah Wan Ismail was overruled at her husband's whim; and local division leaders were ignored by a top-down party leadership.

Anonymous grassroots leaders have singled out "at least 10 additional parliament seats if the party had accepted the candidates proposed by the respective divisions. These are Bayan Lepas, Kulim Bandar Baru, Langkawi, Tanjung Malim, Bagan Serai, Pasir Salak, Hulu Selangor, Setiawangsa, Johor Bahru and Labuan."
Those same leaders have alleged – in a classic playground taunt – that the grassroots then did not try as hard to get the parachuted cronies elected, leading to critical losses ("a sort of silent protest", as one insider told FMT).

All of this inside gossip reveals yet another set of cracks in PKR, but at the risk of offending these poor souls: did they not understand the party of which they are members? Cronyism, nepotism and autocracy in PKR are not surprising developments, they are at the heart of the party.

Anwar, of course, has been working to isolate his party and his own leadership from the Opposition pact, by pursuing a maximalist strategy that calls GE13's results into question – something that the DAP and PAS have no interest in doing, and that his own lieutenant Azmin has publicly reconsidered. Insofar as this grassroots revolt is the result of his habit of absentee leadership, it is unlikely that the situation will change soon.

Perhaps all of this will come to nothing. Perhaps PKR's end is in the offing. Anwar has his own agenda, and PKR will follow, whether its members wish it or not.
Posted by tunku at 2:57:00 PM