Pakatan's Profound Revelation: MPs Must Be Sworn in to Do Their Jobs 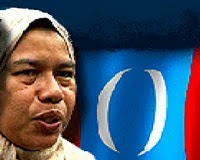 Pakatan's boycott nonsense, the post-GE13 "brainchild" of the increasingly brainless and childish Datuk Seri Anwar Ibrahim, has well and truly entered the realm of the surreal.

In the latest episode of this soap opera, PKR Wanita chief Zuraida Kamaruddin has shuffled forward to tell give us the most blindingly obvious reason so far why the idea is a problem for her own party, her own coalition and her beloved leader.

"In my opinion, we should attend the swearing-in. It is only after we are sworn in as Members of Parliament that we can sit in the Dewan," she said.

You don't say Zuraida! That must be why the ceremony involves MPs taking an oath, in the house, to serve the people.

What we are witnessing here – culminating in Wednesday's unanimous vote not to boycott by PKR's political bureau – is the most carefully stage-managed climb down from a bad idea in the history of Malaysian politics. Everyone knows the boycott proposal was doomed from the start because, as Zuraida so helpfully points out, without taking that oath the Members of Parliament are members of nothing – not to mention the fact they would then be formally disqualified as MPs.

Another part of this climb-down is the transparent attempt to water it down to just a boycott of the briefing session instead of the actual opening of Parliament. That's a bit like the prima ballerina boycotting rehearsals instead of opening night – it might provide a bit of drama but ultimately, it makes no difference to the audience.

But remember, Pakatan Rakyat was never serious about the boycott of the swearing in ceremony. As PKR Vice President Chua Tian Chang said with a straight face during the week: "It was only a suggestion".

Meantime spare a thought for poor Opposition backbencher Bakri MP Er Teck Hwa, who turned up to the briefing session as chirpy as can be until he remembered he wasn't meant to be there. He has since issued a self-flagellating apology for ignoring Pakatan's orchestrated petulance and has, in true DAP form, become a scapegoat of sorts.

DAP Whip and Seremban MP Loke Siew Fook said Er will face the humiliation and torment of "a stern warning". We feel his pain.

The fact that this total non-story still dominates the news cycle here speaks volumes about the federal Opposition we have inherited in the wake of GE13. There are loads of things they could be doing right now to show they are serious about their alternative agenda for the coming term. By articulating good ideas that benefit the nation, they would pressure the Government to respond to their agenda. That's what responsible Oppositions do.

Instead they were until Wednesday night still talking boycotts, an already feeble idea being watered down before our eyes from the swearing in ceremony to the mere briefing session.

Get over it Pakatan Rakyat! Everyone else was long ago ready to move on.
Pakatan's Profound Revelation: MPs Must Be Sworn in to Do Their Jobs - See more at: http://www.thechoice.my/featured-articles/64888-pakatans-profound-revelation-mps-must-be-sworn-in-to-do-their-jobs#sthash.6RizvxUp.dpuf
Posted by tunku at 2:20:00 PM