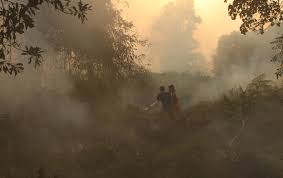 Malaysia will support any action by Indonesia against errant Malaysian companies found to be involved in agricultural open burning activities blamed for the haze.

"If at all they (companies) are Malaysians and Indonesia does take action, Malaysia will surely support such action," Health Minister Datuk Seri Dr S. Subramaniam told reporters this after the swearing-in ceremony in Parliament on Monday.

However, he acknowledged the Government here could not interfere with internal legal matters as the companies are operating in Indonesia under local laws there.

"We are not telling them (Indonesia) not to take action, please do whatever you have to do under your laws whether it is a Malaysian, Singapore or Indonesian company," he added.

However, at the present, he said there was no proof of Malaysian companies being involved with several companies denying they were involved.

He was asked to comment on claims by Indonesia's Senior Presidential Aide Kuntoro Mangkusubroto that three local companies, namely Asia Pacific Resources International, Asia Pulp and Paper and Sime Darby, were involved in open burning activities in Sumatra.
Posted by tunku at 5:40:00 PM