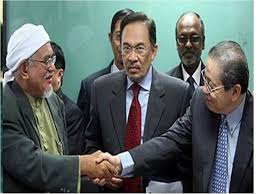 A month has passed since the Barisan Nasional won the 13th General Election, but Anwar Ibrahim still can’t accept the fact that he lost what critics has called “the mother of all election”. Anwar is currently at the brink of madness, organizing demonstration, spreading lies about the government, making fake police report, filing petition and pushing the election commission to investigate the alleged election misconduct of the government.

Too bad for Anwar Ibrahim, his childish tantrum to attract attention and disturbing the administration process of the government did not amount to anything. Moreover, the entire candidates who have won the election have already taken their oath and administrations of the state are going well as usual.

Anwar now is trapped in his own game, as the people of Malaysia are currently pushing the Pakatan Rakyat to stay true to his words and to boycott the Dewan Rakyat.  He does not have any other choice as to avoid being publicly humiliated by his own supporters.

It is impossible for any other Pakatan Rakyat candidate to boycott the Dewan Rakyat as they have already given everything they have to win in the last election. Anwar Ibrahim is currently disregarding the fact that all of the Pakatan Rakat assemblymen are ready to sworn in and “serve” the rakyat with their newly found power.

For example The PAS MP of Shah Alam stated that “We have already won, why organized a boycott”. The Chief of Selangor DAP said that “the people of Malaysia has already given their support to us, we have to respect the aspiration of the people”.

Come to think of it, why do they have to organize rallies, police report, or making a petition if each and every one of them has already accepted the election results?
It is clear that Anwar Ibrahim is a sore loser and refuses to accept his defeat. Meanwhile, other Pakatan Rakyat members are currently settling down in their constituencies.

Maybe Anwar Ibrahim refused to carry his duty as the representative of the people in his constituency. By organizing rallies and stirring a lot of problems for the administration, he is finding ways to divert the attention of the people so that he can ran away from his responsibilities. Imagine if he drags the issue of “electoral fraud” for the whole term, he can carry the title of “wakil rakyat” without doing anything for his people.

However, before this, Anwar Ibrahim did not think that his action of boycotting the Dewan Rakyat would make him lose his Leader of the Opposition title. Who is Anwar Ibrahim if not for the opposition leader title?  This is the end result of not thinking it through and naturally Anwar Ibrahim will find someone else to be blamed for his stupid mistakes.

To make matter worse, Anwar Ibrahim did not expect that his friends from PAS and DAP will boycott him because of his idea. Without the support of the two major parties, PKR is living in borrowed time. What can PKR do with only 30 seats in the parliament?

Now, we are waiting for Anwar to make his next move. Anwar has already rejected the result of the 13th General Election and indirectly rejecting his own win. Thus, it is fitting that he boycott the Dewan Rakyat or his credibility and honour will be questioned by the people of Malaysia. How can someone accept the title and at the same time opposing the way the    title is conferred.

Anwar is not a person who values honour. He will not have any problem to lie, cheat and even steal his way. If he wants to, he can keep his straight face even when the whole worlds have seen him naked; he is now willing to do anything.