All posts in Umno should be open for contest 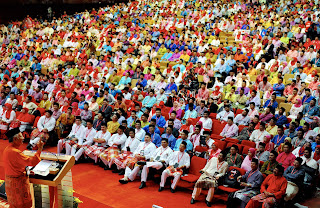 Umno, which was instrumental in forming the government post GE13, cannot do without Datuk Seri Najib Tun Razak as party president and Prime Minister but at the same time, all party posts in Umno should also be open for contest, including the president's post.

Umno leaders who call for the top two incumbents Najib and his deputy Tan Sri Muhyiddin Yassin - to be returned uncontested are doing a big disservice to themselves, to the party and to democratic contest.
Without open contest, there can be no renewal and Umno, being the biggest party in the country, needs to periodically renew itself before the members and delegates.

This is the basic tenet in any egalitarian political party and an election is what promotes constant renewal of leaders and keeps them relevant.
Besides, this time around and with changes to the party constitution in 2009, nearly 150,000 branch members will pick their top leaders and not just 3,000 delegates as previously, thus negating unsavoury practices such as money politics.

This is not to say that Najib will not be re-elected as president if he offers himself as candidate nor is there any other in Umno, for the moment, of equal stature.

Najib took charge in 2009 and formulated a new vision for the country and led Barisan Nasional into the election battle against a formidable opponent, Pakatan Rakyat.
He won and went on to form the Government, and the people now expect him to continue with the job of governing.

He can be disappointed with the results and he can be unhappy with the level of public support for his Government, but the people have spoken and he has his own mandate, albeit a reduce one, and he has the business of government cut out for him.

He should just offer himself to contest for the Umno president's post and just take whatever Umno members and delegates decide and should not be distracted by calls for the top two posts to remain uncontested.
Frankly, these people who are making the call are not only monopolising the issue but also preventing others from a free and open contest and renewal.

In this regard, the recent stand by Pahang Mentri Besar Datuk Seri Adnan Yaakob to reject such calls for the posts to be uncontested is truly commendable.

Umno is a democratic party, he said, and should preach inclusiveness if it wanted to remain relevant to youths and to the educated.
"I do not agree with such calls," he said. "It will show that we are becoming autocratic."
He was quick to add that his stand on the issue did not mean that he was being disloyal to both Najib and his deputy Muhyiddin.

There are genuine fears in Umno that an open contest would lead to camps, internal bickering and politicking, all of which would weaken the party.
There is also a strong desire that Umno has to be strong and united to weather the challenges of an altered political landscape.

They also point to Pakatan Rakyat leader Datuk Seri Anwar Ibrahim, who is claiming massive fraud in the elections and is continuing to organise Black 505 rallies that they alleged are aimed at overthrowing the Government.

"Can we afford to allow internal contests in Umno with so many things unsettled? It will only benefit them," said an Umno leader, referring to Pakatan Rakyat.
Point taken, but this is to assume that all contest in Umno would lead to internal chaos and dissension although such cases are aplenty in the past.

But we live in different times and our time holds that no person is so indispensable that his post in the party should be reserved for him without a simple and open contest.

Surely, Najib doesn't want it that way nor would Muhyiddin.
Posted by tunku at 3:33:00 PM

Tunku,
Agreed. Those who called for no-contest are really selfish. as if they dont know that that is one of the very reasons for umno's negative perception. that umno leaders are perceived to be safeguarding their own interests, not the rakyat's. the rakyat want to see an open, inclusive, democratic umno. thats one of the messages of ge13! for godsakes, we have been talking about this for donkey years!