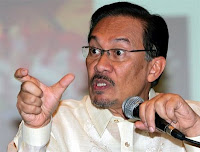 Anwar Ibrahim’s influence is fast dwindling as his supposedly to be the grand finale rally on Saturday turned out to be a failure with hardly 15,000 people participated of an expectation 300,000.
In fact, top leaders of DAP and PAS were absent leaving Anwar and the lower rung leaders of Pakatan Rakyat (PR) protesting against the 13th general election result and demanding the resignations of Election Commission (EC) staff.

What supposed to be the pinnacle of the rally which momentum had been picking up since second of May, had suddenly become ended in an anti-climax and cold, evidently showing the people’s interest in pursuing Anwar’s cause has declined, faster than Anwar and leaders of his Parti Keadilan Rakyat (PKR) had expected.

Anwar has no choice but to ‘eat his words’ and accept the 13th general election result as well as accepting Datuk Seri Najib Tun Abdul Razak as Prime Minister tomorrow (Monday) when he participates in the swearing-in of all Members of Parliament before the Yang Di Pertuan Agong.
He has to swallow his ego and pride and begin his job as a representative of the people of Permatang Pauh parliament constituency and leader of the opposition in parliament.

Anwar first lost the support of PAS leaders when the party spiritual leader Nik Aziz Nik Mat stepped down as Mentri Besar of Kelantan immediately after the conclusion of general election on May 5 and Nik Aziz’s trusted man Husam Musa was not picked as an exco member.

Following that, Kelantan PAS and its central leadership as well as the party Ulamak Council declare their stand that they accepted the result of the general election and they would not join the rally.
This had rather ‘thrown Anwar off the track’ as he had expected to be backed strongly by the Islamic party whose young members are considered as wild and ‘hyper active’ particularly when needed to stage protests and demonstrations.

The move by PAS leadership also reflected Anwar’s men in the party like deputy president Mohamad Sabu, Husam Musa, Dr Dzulkefly Ahmad and few others have been sidelined since Nik Aziz’s left the mainstream leadership.

This had probably led to Husam giving out an edict that whoever dies while participating in the June 22 rally, which edict has got the party leaders ‘put in an awkward position’ because Husam is not a member of the party’s Ulamak Council.

Minus the support from PAS, Anwar’s hope of being ‘recognised and acknowledged’ as “THE’ leader of Pakatan Rakyat (PR) slowly diminishes as DAP’s recognition alone is insufficient for him to be accepted as ‘THE’ leader all races.

In fact, PAS has not supported him to be the Prime Minister all along but uses him to rally support of the people at a time when he was till influential – which was before the general election.

DAP’s chairman Karpal Singh was not supportive of the rally which he had in fact stated in the press but the party continues to support Anwar so long as the aim is to topple the Barisan Nasional (BN).
With declining influence and waning support, Anwar’s last chance of ‘redeeming’ himself, proving that he is right and he is still ‘relevant’ to be the leader of the opposition, is the petitions filed in the courts against EC.