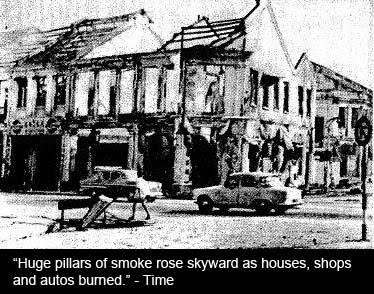 KUALA LUMPUR, June 30 (Bernama) -- The Election Commission (EC) has made a final appeal to the Coalition for Clean and Fair Elections (Bersih) to call off its planned illegal street demonstration on July 9 and negotiate on the eight demands it is seeking.
EC deputy chairman Datuk Wan Ahmad Wan Omar said as a body represented by level-headed members of society, Bersih should abandon the plan due to the involvement of political parties.
"I am appealing to Datuk S. Ambiga (Bersih chairman) for the last time. The negotiation door is still open.
"The EC has never shunned Bersih from discussing the eight demands made but we were then busy preparing for the Sarawak state election in April," he said at a forum entitled "Bersih's Demands-What is EC's Explanation" organised by the Institute of Mind Development here Thursday.
He said the planned demonstration had deviated from its original objective and was being turned into a political rally with thousands of supporters from the opposition ready to join the fray.
Wan Ahmad said he regretted that despite the police not issuing a permit and advising Bersih to call off the plan, Ambiga let herself to be exploited by political parties by planning to go ahead with the illegal assembly.
"Political parties are taking advantage of Bersih's foray. So I advise Ambiga to steer clear of political parties.
"If you want to get involved with political parties or fight for a political agenda, then register Bersih as a political party and contest in elections," he said.
He said the EC had met Bersih for three hours in November last year, during which it (Bersih) submitted 17 recommendations and each member was given the opportunity to speak.
"We enlightened them on what we could and could not do, what is being studied, and what amendments to legislation and the constitution were necessary.
"We told them that everything that was being done would take time and not overnight, not even in one month," said Wan Ahmad.
Wan Ahmad said Ambiga had sought a meeting with the EC through a letter in January, in which she reduced the 17 proposals to eight.
He said the EC was looking forward to have a meeting with Bersih but it had to be put on hold as it was busy preparing for the Sarawak state election.
However, Wan Ahmad said, he was surprised and regretted that Bersih had turned the eight proposals into demands and was adamant on going ahead with the rally, regardless of what would happen.
"Now Bersih is no longer 'bersih' (clean). It has become so entangled. Why is Ambiga in such a hurry and defying police's orders?" he asked.
He said five of the eight demands touched on the EC's function, but it was not possible to implement them during the Sarawak state election as they involved amendments to the Constitution and several acts of law.
He conceded that certain demands could be met before the next general elections although the date for had yet to be fixed.
The eight demands are cleaning up the electoral list, reforming the voting system, using indelible ink, setting the campaign period to at least 21 days, free and fair media access, strengthening public institutions, curtailing corrupt practices and combating dirty politics.
On allegations of existence of phantom voters, Wan Ahmad said after 2002, the electoral roll was updated and adopted for the 2004 and 2008 general elections.
He described as baseless the opposition's claim that there had been cases of electors casting votes twice as it would be difficult to cheat due to the fact that the MyKad identity document contained 12 digits.
The Mykad could not be easily abused unless one used a fake identity card, he added.

tunku : they are not interested in holding talks with EC, they only want to create tense and chaos in the country.this is the main objective.let them engage with police and others on 9th July as they had wish for.
Posted by tunku at 12:00:00 AM

I think the organizer can have their demonstration only if they are willing to compensate loss of income, damages etc as a direct or indirect result of the gathering. Infact if they can give that assurances, they can have it for 40 days and 40 nights for all I care.

They want something like Egypt to happen here. Fullstop.

The Government must understand as we approach the status of a high income nation we must also witness the growth of freedom and the rule of law and not by law. This are the main principles that allows for the expansion on the freedoms of the individual which is at the heart of our creativity. The government must observe the fundamental and concepts that are realted to the subjucation of the state to individual who is now exposed to a greater extent then our parents to knowkedge and power of comprehension. The right to vote and expenditure of individual candidates in the election process must be respected in accordance with established international norms as held by countries that can call themselves democracies.

These are the universal stakes that come to my mind in the the events leading up to 9th July. These were the and are the founding principles on which Malaya and later Malaysia was founded upon. I am waiting for the response from my Prime Minster and I hope that he will speak for One Malaysia without the threat of the use of the state security apparatus.

It is a shame that they cannot sit down and discuss things. We are not like the middle east. We are not like Egypt where our people and our leaders cannot sit down and come to an agreement. It seems that someone, is trying hard to cause havoc, so that the international community can come in and have a say of things. If they cause enough havoc, I'm sure Malaysia will then be pressured to get help from other countries. For example, US. Then, wonder what the people have to pay for getting any of them involved.

Jose, I agree with you. That is why it so important for the PM to take the bull by the horns and not allow the PDRM to determine if an emergency should be declared. No matter how you look at it this is still a political issue of perceived or otherwise of fairness in which our General Elections are conducted.

Parliament is the supreme policy making body under our constitution and is imperative this body should be allowed to ensure that the right messages are ent out to the institutions of the state to conduct their affairs of running this cvountry in a free and fair manner.

We must be reminded that running a country is very much like running your family. If members of the family even perceive that they are not being treated fairly by the head of the househild then uncles, brothers in law, mother in law and father in law will put their two sen worth in the running the family.

Once you fire that bullet in anger remember that you cannort recall it.

in some families, the adopted child is asking for equal treatment which is unlawful

if the non-bumis ask to be given the same special status, this is unconstitutional