How will PDRM issue permit to an illegal body ? Where's the logic ? 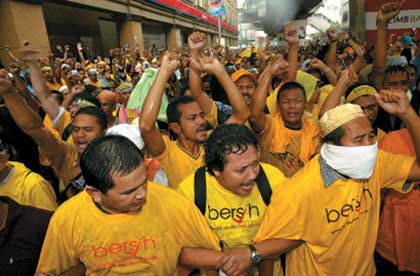 Perkasa Wants To Hold Rally In Stadium, Have Audience With King

KUALA LUMPUR, July 6 (Bernama) -- The Malay right-wing movement Perkasa said today it would go ahead with its rally scheduled for July 9, but in a stadium, and that it was seeking an audience with the Yang di-Pertuan Agong.
Its president, Datuk Ibrahim Ali, said the movement had applied to have the rally at the Merdeka Stadium, Stadium Negara or Titiwangsa Stadium.
"We have applied for the police permit and sent applications to the stadiums concerned," he told reporters after a meeting of the Perkasa supreme council, here.
He said Perkasa had also sought an audience with the Yang di-Pertuan Agong to explain the current situation and obtain the advice of the king.
Ibrahim, who is the Pasir Mas MP, said Perkasa had also sought a meeting with Prime Minister Datuk Seri Najib Tun Razak, either tomorrow or the day after.

tunku : by right perkasa request or application should be processed first as it is a legal group.it is registered while Bersih is illegal as it is not registered.i don't understand how will the police issue permit to an illegal body to hold a rally? where is the logic? what is so special about Bersih? why they are given special attention? if they are given permit then the police should give to others unregistered bodies too.let them apply the permit using a legal and registered body not an illegal one.

Bro,
nice one, let the PM eat this.
They make the rule like this is their father's country.
where's the logic?.After this, hindraf also can applied a permit even the underground gang or kongsi gelap can also do the same.
illegal body? itu lain cerita ma.
how stupid.

Most probably the best decision would be for Bersih to postpone the gathering to another day until they are legalised?

Let it be until Election Day with postponement after postponement until they get the right to assemble in peace?

The fact that DYMM SPB Yang di Pertuan Agong agreed to receive Bersih reconition is implied and it is a message to the government to negotiate in good faith.

With the advent of the internet it has become, weather we like it or not, a wired world.Reputations of governments are constantly under attack when they are perceived to be unfair.It is therefore incumbent of governments to provide explanatios and clarifications strictly based on the principle of accountabiltity and transpsrency. In this regard, disclosure of information to the citizens is watch word and pivotal in the building of trust.Governments that operate with respect for basic human rights and engage key citizen's groups, registered or otherwise,will help to build up a reputation and avoid the risks that the advent of the internet age can bring.

Ensuring that citizens, registered or otherwise, are taken care in a manner in which the community can benefit is the key to gaining a positive perception not only at home but also abroad. Never forget that Asia has the highest rate poverty rate and innovative measures are required to get out of tha syndrome before we are all consumed by it.