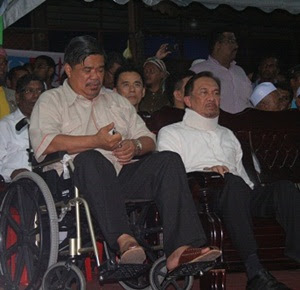 KUALA LUMPUR, July 23 (Bernama) -- Puteri Umno wants PAS Deputy President Mohamad Sabu to come clean whether he still stands by his claim that he was hit by a police 4WD during the July 9 rally.
This follows the move by police last Thursday to screen video footage of the alleged incident.
Puteri Umno Chief Datuk Rosnah Abdul Rashid Shirlin said Mohamad Sabu's claim that he was hit by a police vehicle during the rally had been proven otherwise.
"It is important that he come clean and confirm or deny what has been exposed by the police," she said in a statement here Saturday.
She said Mohamad Sabu must apologise to the police and the people of Malaysia if what was shown by the police -- that he had never been hit by a police car -- was true.
Last Thursday, the police showed a video recording to the media which showed Mohamad Sabu was not hit by a police Pajero car as alleged.

tunku : how can a liar,a man without dignity,without principle like sabu will come clean....he did not come clean last time when he had affair in room 121, what you expect from him when he was one of the earliest who accused anwar with the sodomy activities and called anwar "aljuburi" but now share the same stage.the police should take action against mat sabu for making false report and accusation against them.
Posted by tunku at 12:00:00 AM