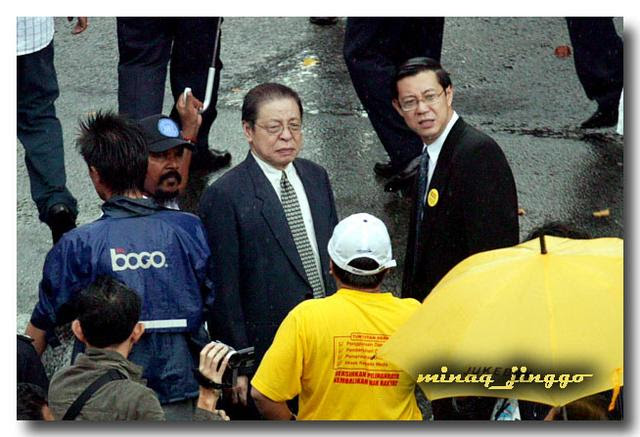 GEORGE TOWN: A verbal war has erupted between Chief Minister Lim Guan Eng and Senator Ezam Mohd Nor, who led a Friday march towards Komtar to protest against the Bersih 2.0 rally.
Lim rapped State Umno liaison committee chairman Datuk Zainal Abidin Osman for saying that the party was not involved in the protest.
“The arrest of Senator Ezam Mohd Nor by the police for illegal assembly indicates that Umno is trying to deny its involvement in the demonstration,” Lim said in a statement yesterday.
On Friday, a group of protesters marched at the mid-span of Penang Bridge causing a 10km-long traffic jam.
Ezam, in a tweet yesterday, criticised the Chief Minister of “hypocrisy” as Lim had been supportive of Bersih 2.0 rally but condemned Friday's protest march.
He also challenged Lim to pull out of the Bersih 2.0 rally if he was sincerely against street protests.
“As Lim had openly condemned the rally in Penang that brought traffic to a crawl, he should also condemn the Bersih rally planned in Kuala Lumpur next week.”
“Otherwise, it will only expose the hypocrisy of Pakatan Rakyat leaders who have a tendency to re-define rules at their whim and fancy to suit their political interest,” he said.
On Lim's part, he posted in his blog, calling on Umno to apologise to the public for their involvement in the rally. However, Penang Umno has refuted talk about its involvement in the protest.
Penang Umno secretary Datuk Azhar Ibrahim said if Umno were to hold such an event, they could attract tens of thousands of protestors as they had 150,000 members in the state.
“If Umno was involved, the crowd would have been much bigger,” he said. Azhar also noted that Lim had staged numerous demonstrations in the past against the Malacca Chief Minister.
“But Lim obviously could not take it when the people of Penang start criticising him,” he said.

tunku : the moron lim guan eng should condemn Bersih illegal rally on 9th july and urge pakatan's members not to participate in it or just shut his mouth up about the demos in penang.lim guan eng is tasting pakatan's own medicine.don't be a hypocrite.you condemn the protest in penang but at the same time you support the protest elsewhere. what a jerk.
Posted by tunku at 12:25:00 AM