Anwar Given Clean Bill Of Health 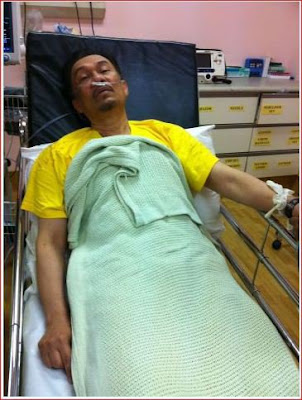 KUALA LUMPUR, July 9 (Bernama) -- Parti Keadilan Rakyat (PKR) adviser Datuk Seri Anwar Ibrahim, who was admitted at Hospital Pantai Saturday has received a clean bill of health from doctors.
According to his daughter Nurul Nuha, this was confirmed by doctors after the opposition leader underwent computerised tomography scanning (CT scan) and magnetic resonance imaging (MRI) procedures.
"However, doctors require another six hours to monitor his condition," she told reporters at the Kuala Lumpur police Headquarters, here.
Anwar was said to have sustained injuries when police tried to disperse an illegalrally at KL Sentral, which he attended with its organiser Datuk S.Ambiga and PAS president, Datuk Seri Abdul Hadi Awang.
Ambiga and Abdul Hadi were detained by police but were later released.


tunku : this moron try to create sympathy for himself.there is no such videos or photos that he was injured.he was trying his best to get mc so that he can postpone his sodomy trial next week. what a drama queen.end of the day, hospital said nothing wrong with him.while other leaders been arrested or have to go thru everything in confronting the police, he escape by pretending to be hurt.what a rascal.where are the bruises and the cuts?
Posted by tunku at 12:07:00 AM

I thought the doctors discovered that tiny little birdie when they scanned his brain.

And the academy award goes to.....Anwar Ibrahim, for best Actor in his role as....

I saw his video on youtube.
http://www.youtube.com/watch?feature=player_embedded&v=PfPJW9acUUQ
He really is trying to make Malaysia look bad. Will the Malaysian people be fooled with his drama? Do we want to have an actor for our leader? Even the Americans wont vote for Arnold after all his controversies? But Malaysians, we are too gullible.

It was reprted that upon Khairy release from police arrest, Khairy visited Anwar in hospital just like in the old days when Khairy went to Anwar home to sent his international passport personally upon Anwar release from Sungai Buloh.

Yes it all appears as fun. Just as the debt crisis in Greece is a Message form God to all of us as to what will happen if we live beyond our means and run up a deficit that is two times our GDP, July 9th will be the day that God sent a message to Malaysia and it rulers to change the way we manage this nation and our financial system.

Greece had to wait ten years to find out the full impact of its living beyond its means and may be we, too, will be given that amount of time by God to get things right.

Thank you, Tunku, for your coverage of July 9th.

wow. so this is the spot where all the pro-umno ppl gather to condemn PR. i take it that you feel all is well in the government and that they are flawless in their conduct? your english is superb. sadly your ideas lack substance.

anon, 9.46pm,
u can go where yr group is and where they think that they r flawless n government is wrong all the time.sorry 2 say u r brainless.

rizal. i never said that the opposition is never wrong. far from it. however i can see that any comments that are of a differing view would be greeted with name callings and expletives. really matured huh? ive read the entries here and non of them are constructive in any way. siap nak doakan org mati la. ape nya org islam mcm ni. and yeah, in actual fact, ada video DSAI kene skali2 ngan bodyguard dia. do some homework and google for videos. those that dont require 99.9% verification from a professor. brainless?? i bet u just watched tv3 and made an absolute conclusion out of it. bahh

even alive he stinks like bangkai, his days as a free man is numbered

so you are now saying you are the brainiest commenter eh?

anwar omega is an ex-convict for ... you wanna guess?

and you still look up to him - herein lies the FACT that you are the gullible, clueless and brainwashable type - perfect candidates for anwar's 10 year brainwashing programme

psst ... talk to EX-friends of anwar and just ask why did they break off their friendships with him, after so long??

and since you are SSOOOOOO smart, I shall not name these (long list) of omega man's friends

P.S. a word of caution - your brains may shrink after the programme

"and yeah, in actual fact, ada video DSAI kene skali2 ngan bodyguard dia. do some homework and google for videos. those that dont require 99.9% verification from a professor." by Anonymous July 11, 2011 1:09 AM.

I'm sorry for being so inept and stupid. I tried googling, tapi tak jumpa pun video. I would like to see the video Anwar kena tembak dgn Tin GAS pemedih mata. I am not a supporter of Keadilan, and because of I believe BERSIH people are MOSTLY (not all) Keadilan,DAP and PAS people, I do not support BERSIH. But, if you can please give me a link to the video, I would change my mind immediately. I don't believe in police brutality. So please convert me to a BERSIH believer. Here is your chance to win another person to your cause.
Most of my gooling turns out to show that Anwar and Mat Sabu a bunch of first class actors. So please, give me the link.

Oh and tunku, if he does give the link, tolong lah approvekan...

http://www.youtube.com/watch?v=Halj1mT47NU . tadaaaa. granted, it is a video of him in kl sentral. i can vouch for it because my sister in law was there and they all got sprayed by the tear gas. so are u gonna call me a liar now? and btw, i never called anyone brainless. it was rizal who called me that. i merely commented that this blog lacked substance.
oh yeah, anwar was acquitted of sodomy and corruption. abuse of police power? sure when he had to defend himself.
anyway, i can see that i wont be winning any friends here. if u are open-minded, dont limit urself to tv3 and rtm. i was there at bersih to find the truth. and absolutely everything reported in mainstream wasnt true. i went there not because ambiga or anwar told me so. i was there to fulfill my duty as a citizen to see it for myself and to judge. and everything reported by reuters, malaysiainsider and malaysiakini were true.
but i bet none of you were there see what really happened. and u hurl abuse after abuse at me for having different ideas. just youtube for anwar cedera bersih. you'll see plenty of photos and videos, those that i can vouch for. so unless this blog is about seeking the truth, perhaps i wont be coming here anymore. such a pity. the english is very good. :)

I'm sorry your tadaa is not really tadaa there. Its more like kuang,kuang, kuang.... All I see is DSAI well protected by his supporters and reporters and then he is back in the station. I highly doubt that being flooded with cameras in this technology and age, that not a single person managed to get a video or picture of him actually being hit, or even in the mist of the gas. So naturally, I say its bullshit. You have to understand my perspective of things. I don't see it, I don't believe it. Of course, I was not there. I am also claim to be doing my duty as a citizen. Your sister in-Law was there? Hahaha, that clears my doubt. So I figured my Brother in-law who happens to be there as well must be lying when he says it was bullshit. So you see my problem there. Should I believe your Sister in-law or my Brother in-law. I think you should be coming back, I always keep coming back to non-friendly websites like MT, MK and MalaysianInsider, even though they never approve my post. You should be open minded too, eventually, you'll make friends. Can't expect to make friends overnight, that's just artificial.

it seems that you can be very selective with what you choose to believe even though you never saw it or vice versa.

perhaps you are saying najib lied when he mocked anwar for being gassed? are you still denying that the FRU released tear gas onto kl sentral?

i just dont know what to believe in MSM. and sometimes even malaysianinsider. however i did take the initiative to go and witness Bersih firsthand and to discover the truth about what went on. and to date, none of the MSM reported fairly on what transpired.
au contraire, TMI conformed truly to what really happened, especially on the Pudu part where i was in. tung shin did get gassed. 3 rounds when i was there. and most of the ministers were still denying this.

So unlike you who would only like to criticize and put all the blame on DSAI, i got off my ass and did something. and i discovered a whole world much scarier than what is reported in your beloved RTM.

sure, you said you were doing your job as a citizen by not coming. then if you weren't there, then are you in a position to judge? you now have to rely on MSM or pro-opposition news. so in your infinite wisdom, which one would you believe? the things you see or the things that you didnt see?

lemme just tell one thing that i can be absolutely sure about. i might not be certain that anwar is right. i might not be certain that BN is evil to the core. but 1 thing i am absolutely certain without a doubt, that when i was at bersih with ppl from all walks of life, singing negaraku and truly smiling and helping each other when anyone fell down, offering each other salt and water, that i wasnt wrong to be there. the spirit and camaraderie of msians was a truly humbling experience for all of us.

anyway yeah, ill be coming back here. this might be your world where most of you agree with each other and pat each other's back while cussing and cursing DSAI and PR. its fine because it is your blog. the air is really hostile but i think ill manage. :). we are all students of truth arent we?

ps. dont belittle what i just said. my sister in law might mean nothing to u but theres no reason for me to lie to u. would be a complete waste of my time. and btw, when they gas you, no one, and i mean no one will stay and take pics or vids. you just run because the gas absolutely messes you up. y dont you try it just for kicks. after all, you gotta see it to believe it right?