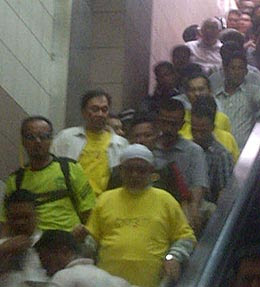 KUALA TERENGGANU, July 11 (Bernama) -- PAS president Datuk Seri Abdul Hadi Awang Monday denied that the Coalition for Free and Fair Elections' (Bersih) illegal rally in the federal capital was organised by political parties.
He said the illegal rally, which he also participated in, was joined by Malaysians of all walks of life.
He said this when speaking to his supporters who had gathered at the Sultan Mahmud Airport here to welcome him on his return to Terengganu.
Hadi also said that he was treated well by the police while being detained for participating in the illegal rally on Saturday.

tunku : this old man is trying to fool people with brain. only brainless people would believe him.so why were all the opposition leaders and members in the bersih team??
Posted by tunku at 12:38:00 AM

On their own, they won't have the numbers, BERSIH depended on them and they BERSIH.

How I wish for an Opposition party who show their worth by bringging in projects and generate jobs/wealth to the Rakyat.

No experience la these Oppositions.

I think they have the mentality, you gigit like Tian apanama and kangkang like Eli apanama, then one can be popular?

DUMB OPPOSITION PARTIES WE HAVE!

Then why shouts of reformasi were heard??

I think the crowds are the same ones employed by omega man during Tun Dr M era.

Maybe this time the fees are a bit higher to take into account inflation kot.

I have been a supporter of you blog and respect the views that you hav expressed. But based on my experience working in many Third World countries we will never be able to solve our basic problems of governance until and unless we get serious about the declaration of assets held by Senoir Cvil Servants and politicians to an Independent Arbitration Body. Countries such as Korea and Singapore who were our peers just 30 years ago have got streets ahead of us because of the seriousness with which this issue was handled. Thank You