Bersih’s Ambiga: No street march, rally will be held in stadium 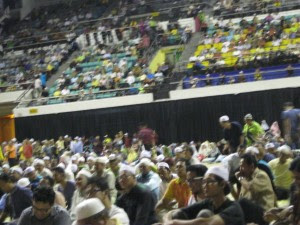 KUALA LUMPUR: Bersih 2.0 chief Datuk Ambiga Sreenevasan emerged after an audience with the King Tuesday and said the planned rally on Saturday would be held in a stadium.
There would be no street march, she told reporters.
She said Bersih would hold discussions with the Government about the venue.
On her audience with the King, she said: "We had a most wonderful meeting and are most grateful to the King."
She was accompanied by Bersih steering committee member Zaid Kamaruddin and national laureate Datuk A Samad Said.
The leaders had made a request Monday for an audience with Yang di-Pertuan Agong Tuanku Mizan Zainal Abidin after he made a statement Sunday advising restraint and compromise as street demonstrations would do more harm than good.

DYMM SPB Ynag diPertuan Agong has spoken for Malaysia. No matter how you look at it this matter should have been settled by the Chairman of the Election Commission. If he could not do it then the PM should have done it.

I hope that more people in government na opposition will heed and speak for Malaysia and not just their narrow interests.

I like the Bersih at the Stadium. Now I'm even thinking about supporting it. I hope the government and organizers will try to take advantage of this event by allowing business sectors to open up booth and food stalls. It doesn't have to be an uptight event. People want to support good governance, but if everybody is happy, including traders, thats even better.

just be mentally prepared to run and lose your day's earnings