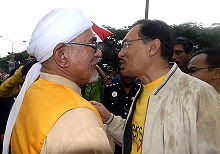 KUALA LUMPUR, July 26 (Bernama) -- Deputy Prime Minister Tan Sri Muhyiddin Yassin described PAS as being "too orthodox" for rejecting the biometric system which the Election Commission (EC) plans to introduce to address alleged existence of phantom voters in the electoral roll.
He said the proposal by the EC was to improve on the voter registration and verification system and to address numerous misunderstandings arising from claims made by opposition parties.
PAS should not reject the system hastily and should instead give the EC a chance to submit their proposal and discuss the matter with all parties prior to implementing it, Muhyiddin said.
"They are too orthodox in their thinking. The proposal is to bring improvements to the system and to overcome numerous misunderstandings, which give rise to the notion as if the electoral roll is not clean, as if it has phantom voters or duplicate names.
"They should be reasonable. But if the party is (adamant on rejecting the system), then it is so characteristic of PAS to reject anything that is good," he told reporters after launching the "school in hospital" programme at Kuala Lumpur Hospital, here.
Muhyiddin also rejected claims that the new system was a political approach, and stressed that it was to resolve allegations of phantom voters and duplicate names as well as to improve the overall election system in the country.
He added that the EC had also proposed numerous other improvements including carrying out checks and clean-ups of the electoral roll by delisting the names of those who have died.
"The biometric system is just one of the approaches. Under the system, when we cast our votes, we scan our thumbprints; by doing that, the EC can be assured that the person carrying the identification documents are the legitimate owners.
"If this is done, then there won't be any attempts by the so-called phantoms to vote. Meaning, those who come to cast their votes are the legitimate electors in that particular polling centres," he said.
Muhyiddin was asked to comment on the statement by PAS president Datuk Seri Abdul Hadi Awang which said that the biometric system would not be able to solve the issue of phantom voters.
On his meeting with BN members of parliament Monday, Muhyiddin said it was a routine meeting to exchange views on current issues and on how they could further improve their service.
Asked whether the frequent meetings with elected representatives are signs that the election is coming, he said: "I've always said that the election is around the corner; whether the corner is far or near, we don't know."

tunku: for them only if they win then only EC is clean. government and EC can do whatever transformation or further improvement to the voting system.they are just looking for excuses.EC should not waste their time on these jokers.
Posted by tunku at 12:00:00 AM