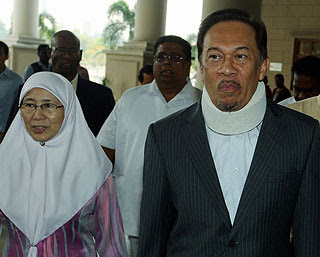 KUALA LUMPUR: The High Court has fixed August 8 to August 26 for the hearing of Datuk Seri Anwar Ibrahim's defence for sodomy.
Anwar's counsel Sankara Nair said he will will submit an application for the prosecution to produce 20 witnesses to be interviewed by the defence.
On May 16, Anwar was ordered by the High Court to enter his defence over the charge of sodomising his former personal aide Mohd Saiful at a condominium unit in Bukit Damansara here on June 26, 2008.
On July 6, Anwar failed in his third attempt to recuse his sodomy trial judge and wanted to take the matter to the Federal Court.
Court of Appeal judge Justice Hasan Lah, who chaired a three-man panel, allowed a preliminary objection raised by the Public Prosecutor over Anwar's appeal against the dismissal of an application to recuse the trial judge. The panel also rejected the appeal.
In elaborating, Justice Hasan held that the June 6 ruling by trial judge Justice Mohamad Zabidin Mohd Diah not to recuse himself from continuing to hear the ongoing sodomy case was not a decision as it was made in the course of the trial.

tunku : hopefully by then the moron's neck will be "ok".i wonder how he's acting in pain.at home for sure he will not wear the neck support brace.just as he wants to go out he will wear it.so august 8 has been fixed for the moron to enter defence, we hope in the fasting month he won't lie but knowing him, he will do everything during fasting month.can ask nallakarupan about that.
Posted by tunku at 2:58:00 PM

They say that the evidence is overwhelming. Then why is this case taking so log? We should get it out of the way so that the nation can move forward.