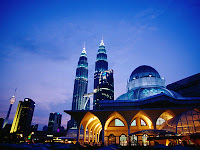 Prime Minister Datuk Seri Najib Tun Razak has called on the South-East Asian region to be a catalyst for the revival of the golden era of Islam. However, he said Islamic Revivalism had to be of a wide scope and holistic, and that it should not be defined by just form but also substance. “Islamisation should not just be superficial, but encompass the basis and fundamentals of the society at large. “This includes economic growth, the preservation of the Syariah, political integrity and a more meaningful and positive regional cooperation,” he said at the Nusantara seminar titled “Islam in South-East Asia: Challenges and Hopes” on Saturday. The text of his speech was read out by Minister in the Prime Minister's Department Datuk Seri Jamil Khir Baharom. Najib also called for a second wave of Islamic renaissance which was independent and with an economic fortitude reflective of the current times. “We cannot be sentimental and nostalgic about with Islam's past glories without looking forward at new challenges in an open market.” At the same time, he said reviving Islamic values in South-East Asia meant going back to spirit of wasatiyyah (moderation) that the region was long known for. “Extremism, radicalism and terrorism are all concepts that are very foreign to this region,” he said. He added that, while Islam in South-East Asia had been moderate in character, it was undergoing a process of revivalist change in some segments of society. “Some South-East Asians returning from Islamic religious schools and Pakistan have returned with a new, radical, militant, and extremist form of Islam that is more likely to be anti-American or anti-Western in character,” he said, adding that Malaysia, too, was not spared from it. Najib said that since the 1980s and 1990s, Malaysians were already exposed to extreme and antagonistic politics that had contributed to the split of the Muslims. “The Arab Spring is used as a new political template in the South-East Asian landscape. In the name of democracy and the freedom of expression, they would rather bring the political debate to the streets.”
Posted by tunku at 3:03:00 AM