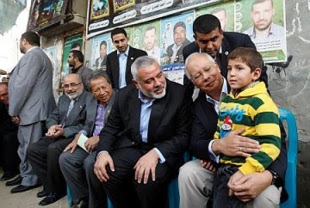 Coming home to a hero’s welcome with no less than 10,000 Malaysians at KLIA, Prime Minister Najib Tun Razak has succeeded in putting Malaysia in the world’s map as a moderate country that loves peace and a country with plentiful opportunities for businesses. Hitting two birds with one stone – the visit to Gaza and the WEF in Davos – Najib has shown to the world that Malaysia is a country that is accommodating and tolerant while same time vibrant in its economic development. Najib’s visit to Gaza was to see by himself the situation there where the Palestinians have been under ‘inhuman onslaught’ of the Israelis and living in fear every day and night. His success in his visit has created uneasiness among the oppositions back home particularly Anwar Ibrahim who is a ‘buddy’ to Israel and same time trying to curb or prevent investments to Malaysia. Anwar has been painting a ‘black Malaysia’ to every country in the world, hoping he could ‘cruise’ he way to Putrajaya, the position he has been dreaming and having nightmares. Najib’s visit to Gaza ‘to see with his own eyes the state of being of the besieged Palestinians, and had wanted to visit both Gaza and the West Bank but was unable to do so due to the volatile political situations there. "The Israeli gave an indication that we have to recognise the state for a visit to the West Bank, but the price is too high. And Abu Mazen understood this. Our visit was purely humanitarian, nothing more nothing less," he had said. But Anwar was quick to lie that Najib's visit had incurred the wrath of Abu Mazen, another name for the Fatah's leader Mahmoud Abas, an attempt to create anger among thinking Malaysians on Najib’s visit. Anwar cannot do like what Najib did because he is a ‘buddy’ of Israel and a word from him supporting Palestine will incur the wrath of his Israel master, and condemning Malaysia in the eyes of the world has apparently backfired, if viewed at the success of Najib’s performance in Davos where the world’s business circle had shown much interest in Malaysia. Anwar’s ‘jealousy and hatred’ got worse when American media played up Najib’s visit to Gaza and the overwhelming reception Najib received in Davos, contrary to Anwar’s expectation as he has all along thought Najib and Malaysia would get the ‘cold shoulder treatment from the world community’ following his (Anwar) campaign against the Prime Minister and Malaysia. And with no less than 10,000 Malaysians welcomed Najib’s return at the airport, Anwar’s feeling went down, hopes for brighter days ahead dashed as he saw Najib surrounded and cheered by the crowd. Given the success of Najib’s visit, Anwar and the oppositions are further pushed to the corner as the general election draws nearer as Malaysians, thinking Malaysians who are voters are fast abandoning the ‘purported idealism’ propagated by the oppositions.’
Posted by tunku at 10:35:00 PM