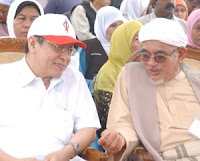 Should the question above be asked to DAP? We don't think so, because for whom would the malay-language Bibles go to if it's not for those who speak Malays? And who speak Malay other than Malay? Thus, perhaps the headline above need a little tweak by asking the question to PAS instead of DAP. Why PAS? Because PAS often proudly announce that they fight and defend Islam. Logically, the ones who fight for Islam would definitely go against DAP. But some PAS members did ask, why don't point the question to UMNO, UMNO often say that they fight for Islam and Malay. The answer, it is because UMNO does not work alongside DAP. One of the reports from Malaysian Insider which shows Nasharuddin Mat Isa's enough to explain everything as the headline reads, "PAS Respects Bibles in Bahasa Malaysia". The report was written by Malaysian Insider based on the issue of the import on 35,000 Malay-language Bibles from Indonesia back then. This matter was raised by a member of Selangor State Exco, Elizabeth Wong where she said that it is a bad development. She added that the action would only tarnish the image of Malaysia as this country is seen as a moderate country, internationally. Next, Malaysia also reported that many sides including PAS in PR pushes Putrajaya to allow this Malay-language Bibles to be imported to this country. The Malay-language Bibles from Indonesia became controversial as it uses the name Allah to refer to Christian's god. From there, the government was criticized by Christian organization for banning the Bibles to be exported to Malaysia when it does not go against the law. The opposition, PAS, DAP and PKR in the other hand, took the chance to hit the government on this issue by saying that the government is biased as it only focuses on Islam, and not open towards religion. Malaysian Insider's report, including Nasharuddin's statement, is consistent with Nik Aziz's stand in the same issue just like what was reported by Harakah in January 21, 2010 saying that the Kelantan government do not stop non-Muslim of the state from using the word Allah, both verbally or in their religious books. The reason why I brought this matter up is because a few PAS members tried to deny that PAS supported the distribution of Malay-language Bibles and accuses UMNO for not taking the right actions. When the fact is, PAS leaders not only gave the green light, the party even pushed the government to 'have an open mind' towards the matter. Now, thanks to PAS's fight in supporting DAP to allow these Bibles to be distributed, another 100,000 is distributed today. Perhaps Nik Aziz would say ‘Alhamdulillah!’ as a response towards this development? It is clear that PAS definitely did not have any problem with the distribution of those 100,000 Malay-language Bibles to help spread Christianity in this country. Would PAS deny that? If yes, then PAS would need to first file a suit against Harakah and Malaysian Insider. If not, then PAS should stop denying and admit that they have been working alongside kafir to make Muslim murtad.
Posted by tunku at 3:00:00 AM