Should EC Be Trusted Or Not? Which One, PR? 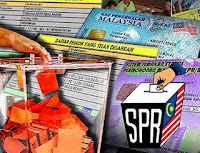 As PKR leader, Anwar Ibrahim gave a speech during the Kebangkitan Rakyat Assembly organized by PR in Seremban last Saturday, he again questioned the credibility of the Election Commission (EC) as he accuzed that EC's voters' registration was filled with doubtful information. He added, there were cheating attempts in the latest EC voters' registration during the fourth quarter of 2011 as there were abut 1 million new voters were registered within a year. But up until June 2012, according to EC records, there were still around 3 million people who are still yet to register as voters even though most of them have reached the age of 21 and quite a number of them are more than 30 years old. Probably if more than 70% of those who are still yet to register managed to be registered, Anwar might just say that those people are phantom voters. In a way, for Anwar, the increase in number of voters seems to be irrelevant and illogical. His doubt was expressed by Selangor's Chief Minister, Khalid Ibrahim as he claimed that 400,000 new voters in Selangor are phantom voters. Khalid however after that admitted that more than 80% of those new voters are legitimate and only around 50,000 are in doubt as they cannot be found. Just because the voters cannot be found, PKR Selangor described them as phantom voters, the fact is, not all of those voters do live in addresses which is stated in their Identity Card especially if they have moved, working or studying outside of Selangor. The interesting part behind Anwar's doubt on EC's credibility is that almost one third of the new voters which were registered was actually the result of aggressive campaign organized by assistant registrars which represent DAP, PKR and PAS. Between the three parties in PR, DAP sits on top for registering most new voters while PAS sits in second place. Another interesting fact is that since representatives from political parties are allowed to register new voters, since then the number of doubtful new voters began to become an issue created by PR. Coincidentally, most of the cases involve weird addresses, name of voters who have deceased, confusing date of birth and IC number, underage voters as well as registering migrants and various other things which involve representatives from the opposition. Two months back, Anwar told that his dream of becoming the next Prime Minister will come true by forcing EC to announce PR's victory as soon as 2.30pm on the GE13 voting day. "By 2.30pm, I will contact Tan Sri EC, (and say) Tan Sri, I have gotten the result. I will give you half an hour, announce it in a proper and transparent manner. If not, we will take immediate action against EC," said Anwar during his ceramah in Ampang last September (refer to portal AntaraPos September 10, 2012). If we are to read Anwar's statement like what was published by Antara POS, we could extract two things from it. First, Anwar is convinced with EC's credibility, and second, Anwar would do just about anything to reach his personal dream. At the same time, as Anwar goes back to his old habits in questioning EC's credibility, like how we could see in his ceramah in Seremban last Saturday, Mat Sabu in the other hand, openly announced that PR could take over Negeri Sembilan in the coming GE13. He said,"we are expecting on voting day, we could know that Wisma Negeri will be taken by PR by 7pm." What Mat Sabu meant was that he is putting his 100% trust on EC's election system, which really conradicts the question of doubtful voters registration by EC. So where does PR really stand on EC? Do they trust the EC or not? Whatever it is, looking at all the contradictions given among PR leaders, this simply proves something to us Malaysians. The rumors and propaganda saying that EC is not transparent, unjust or has no credibility in handling a fair election is just another political polemic. Besides, if it is true that EC is not fair, PR should have won all states and seats if a re-election is to be organized, right? Now that they are questioning EC's credibility, why still hold on to the power which they get from a doubtful election system. Isn't that hypocrisy?
Posted by tunku at 7:52:00 PM