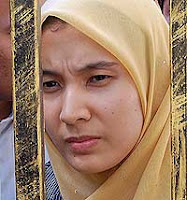 Nurul Izzah Anwar, the daughter of the man whose ambition is to take over Putrajaya no matter what it takes, is learning the ropes of twisting and spinning from her father, or does it runs in the family? Whatever it is, Nurul Izzah has given the commitment to sue Utusan Malaysia and the other dailies for purportedly ‘twisting her statements on No Compulsion on Religion on Anybody Including the Malays’. The articles, taken directly and quoting Malaysiakini and pro-Pakatan websites, was given prominent which puts her in a tight spot, not just losing majority of the Malay-Muslim supporters and members in PKR but more so is her own ‘belief’ in Islamic faith. Nowhere to move and her own ‘akidah’ or faith is questioned, she claimed and allegd that her statement was manipulated, twisted and spinned by the print media concerned, the character of her father and other leaders of the opposition parties when caught ‘with their pants down’ and in Nurul Izzah’s case, ‘caught with her sarung down.’ In the report by Malaysiakini, written by Nigel Auw on Nov 3, Nurul Izzah said people should not be compelled to adopt a particular religion and this should also apply to Malays. "When you ask me, there is no compulsion in religion... how can anyone say sorry, this (religious freedom) only applies to non-Malays, it has to apply equally," she said when speaking at a forum on "Islamic State: Which version; Who's responsibility?" in Subang Jaya, Selangor. Interestingly, when Utusan Malaysia and other print media highlighted the statement, she went berserk and threatened to sue the newspapers involved, leaving out Malaysiakini and other pro-Pakatan websites from where the reports originated. Nurul Izzah then, of course, got the help of none other than PAS liberals the like of Khalid Samad, MP for Shah Alam, who quickly came to her defence, alleging the newspapers had it all wrong. The logic is simple, if the newspapers got it all wrong, then why didn’t Nurul Izzah threaten to sue Malaysiakini and pro-Pakatan websites from which the report originated? Utusan Malaysia and the other newspapers had just lifted the story from Malaysiakini and pro-Pakatan websites, without changing anything and in fact attributed the report to these websites, so why didn’t Nurul Izzah threaten to sue those websites too including Malaysiakini who reported it first? The Malays who are Muslims now know Nurul Izzah is just another Muslimah who has little knowledge in Islam, whose faith or iman is probably questionable, whose thinking is as liberal as her father and other Malays who are in PKR and DAP. Nurul Izzah herself knows she had blundered in her statement and she knows her statement has the Malays and Muslims in her party and other parties in Pakatan distancing themselves, and probably will not vote her and her friends in oppositions. Thus, the suit is the only way she can claimed her innocence which will surprise her when the matter goes for hearing because all evidences are there – in writing and in videos – that she indeed said what were printed and posted. Thus, politically, Nurul Izzah can kiss goodbye to her political career come the 13th general election.
Posted by tunku at 2:30:00 PM