Anwar's Plural and Liberal Agenda Is Getting Clearer 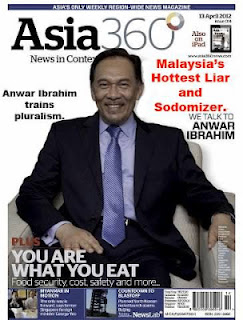 The characteristics of a person depends on the strength of his life principals. A great leader should have a strong principal or he will never be known as a great leader. That is why, even though Adolf Hitler was taken as the worst person in the world, but no one can deny the fact that he was a great leader. Despite of all the criticisms against him, he still managed to influence millions of his people, giving orders to all of his loyal soldiers, making him the greatest leader of all time. Hitler never went around the bushes, denying his evil intentions. Instead, he stood proud and believed that his was making the right decision. Anwar Ibrahim, being known as a person who often sees himself as other great world leaders, do not have any of those characteristics. The world only sees him as a person who is just too desperate to become a Prime Minister. He may never be a great leader because he do not dare to stand on his life principal which believes in pluralism and liberalism understanding. When asked about statements which sounds almost liberal, such as homosexual law is getting stale, Anwar denied the matter. When pushed by friends in ABIM regarding a few of his statements which sounds like words from a pluralist, he denied it too. Even, up until today, Anwar is still trying to convince Malaysian Muslims that he is a true Islamic leader, wise and knowledgeable. He would go around places to give ceramah in mosques. The image of his wife and children in tudung really help to confuse people from realizing his true colors. The question is, why wouldn't Anwar admit his liberal fight and pluralist understanding? Why go around the bush? Why lie to his Muslim supporters? Records of Anwar's movement clearly proved that Anwar really holds onto religion pluralism and liberal. The latest proof would be Nurul Izzah's statement, as well as the Bar Council as they organized Interfaith Commission (IFC) which only reveals plural and liberal understanding which is in her father, probably even the whole family. IFC's main goal is to fight for freedom of religion where a person could change religion based on their own choice, Muslims included. And this is what Nurul Izzah said. She said that Muslims should be given the freedom to choose their own religion, in other word, being murtad. Isn't that the same? Nurul Izzah is clearly based on religious pluralism which puts all religion at the same level, like what was stated by Anwar in his speech at London School of Economic (LSE) in March 18, 2010, entitled “Religion and Pluralism in a Divided World” where he said that no matter what religion you follow, you should only do good and avoid sins." The speech became a controversy, it was criticized by JAKIM and it had caused tension between Anwar and his friends at ABIM. From there, a research and discussion was held to identify the pluralism within Anwar and the conflict with Islam. Dr. Muhammad Uthman El-Muhammady from International Institute of Islamic Thought and Civilization (ISTAC) then identified 12 things which conflicted with Islam in the speech. Those 12 reasons only confirms that Anwar holds onto pluralism understanding and he lives his life as a liberalist. This speech was then uploaded to his blog but it was later taken out when it was objected by JAKIM. The conclusion here, despite of being a leader who is desperate for power, Anwar Ibrahim is still not 'man enough' to stand on his principals. Unlike other leaders who were brave enough to state what they are fighting for instead of just acting. A great leader would never be scared of risks, just as long as their fight would touch the hearts of people which have faith in him.
Posted by tunku at 7:30:00 AM