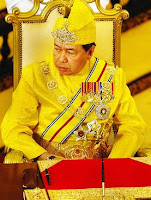 SHAH ALAM: The Sultan of Selangor has called on politicians to stop politicising Islam, as it can mislead the people and cause a split amongst Muslims. Sultan Sharafuddin Idris Shah said the sanctity of Islam was tainted when religious teachings and interpretations of the Al-Quran were used to gain political mileage. "Confusion arises when those who are not knowledgeable, or are not qualified to interpret Al-Quran verses or other items relating to Allah's teachings, interprets according to their own understanding and will, and does not arrive at the actual meanings (of the verses and teachings). "Al-Quran verses are not part of a poem, which can be interpreted according to one's own taste and understanding," he said in his speech at the state mosques in conjunction with Maal Hijrah. Recently, PKR vice-president Nurul Izzah Anwar was accused of supporting apostasy among Malay Muslims. Her alleged remarks on freedom of religion for all have been widely debated by many quarters, with some criticising her and others, such as Sisters in Islam, supporting her. Nurul Izzah had allegedly made the remarks at a public forum on Nov 3, titled Islamic State: Which vision? Whose responsibility? Online news portal Malaysiakini had on Nov 3 also carried Nurul Izzah's alleged comments on the issue. Sultan Sharafuddin said Muslims, particularly Malays, should be wary and re-evaluate their position to ensure that they were not influenced by incitement and propaganda of those who were independent-minded (pemikiran bebas), liberal or pluralists as it could destroy one's faith and make him or her turn against Allah. "I do not want to see Malays leave Islam. Instead, I want Malays to uphold the sanctity of Islam with the strength and wisdom as done by Nabi Muhammad, mujahids and past Islamic leaders," he said. He added that the Malay leaders of the past had wisely inserted the definition of Malays in Article 160(2) of the Federal Constitution, which defined Malays as those who practised Malay culture, conversed in the Malay language and practiced Islam. "If one of the above is not practised, then he or she cannot be considered a Malay," he said. He also pointed out that Article 3 of the Constitution states that Islam was the official religion, thus placing Islam higher than other religions.
Posted by tunku at 9:37:00 PM