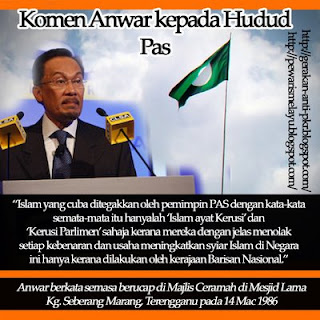 SHAH ALAM: PKR adviser Datuk Seri Anwar Ibrahim said it would take some time before the Pakatan Rakyat opposition coalition is officially registered.
However, he said coalition members had already collectively formulated and decided on the party’s stand.
“It will take some time to register,” said Anwar when asked about a front-page report in a Chinese daily quoting PAS president Datuk Seri Hadi Awang as saying that he was not in favour of Pakatan Rakyat being officially registered as a coalition.
Not saying much about Hadi’s purported statement, Anwar said the necessary documents required to officially register the coalition have been submitted to the Registrar of Societies.
Anwar, who spoke to reporters after receiving the International Association of Political Consultants (IAPC) 2008 Democracy Award, said that it would take some time before the pro-tem coalition’s registration goes through.

tunku : this show that pakatan is just a marriage of convenience.pas has no confidence in pakatan though they act like a united force,that is why hadi is not in favour of the pakatan being officially registered.even anwar has no confidence otherwise he had made the three parties to speed up the registration of pakatan.all they know is to be in power without clear vision.they had failed to fulfill most of their election promises and has yet to impress the people in the state they rules.they talk more than they do work.
by the way what democracy award the melodrama queen received? he's never a democratic person himself.no one can say anything to him, he sues everyone.in his party, anyone voice out will be sidelined.

Anuar. Please. Take all the time you want. No hurry. Take all eternity if you must.

as a jounalist, u shd quote yr source. by not putting u are claiming all those news as your own. ethical la sikit.

anon who don't have a name(ethical la sikit),

i'm not a journalist nor a reporter.

Haji Hadi: Not the time to submit yet, coz resepi "belacan" belum sedap.

Zaid Ibrahim: Dear all "belacan" brothers, I am the man! the Belacanman!

Street crime up 27% in Penang

one of the election promises to bring down crime rate, what happen guan eng.....tidurkah?