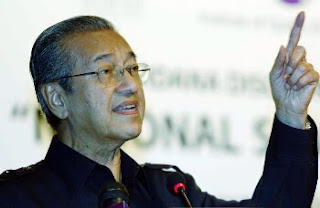 1. I welcome Lim Kit Siang's proposal for Najib to set up a royal commission on whether I burned RM100 billion on grandiose projects and corruption during my 22-year reign.
2. Such a commission should not be made up of Government nominees but should have as members impeccable people including foreigners and members of Transparency International.
3. The commission should not confine to one Prime Minister only but to Tun Abdullah Badawi's regime.
4. It should include how RM270 billion of Petronas money paid during Abdullah's five-year term was spent; what projects were financed by this huge fund and the cost of all these projects.
5. It should include how much money was lost due to the cancellation of the crooked bridge and the Johore Baru to Padang Besar railway.
6. What is the cost over-run in the construction of the Bakun Hydroelectric project.
7. The financing of the second Penang Bridge and the procedure followed when giving out this contract.
8. I also agree with Lim Kit Siang that the investigation would reflect Najib's commitment to "combating corruption".
9. In order that the enquiry by the commission would be successful, Government must give the undertaking to give full access to the commission of all the documents and accounts of the Government over the period 1981-2009. There should be no cover-up of any kind.
10. Barry Wain must provide documentary proof of any sum that he alleged I had burned.
11. I will co-operate fully with the commission.
12. Depending upon the result of the commission, I reserve the right to sue Barry Wain, Lim Kit Siang and Malaysiakini.com for libel for a sum to be disclosed later.
13. If the Government is witholding the book: "Malaysian Maverick: Mahathir Mohamad in Turbulent Times", I would request that the book be released forthwith. I am not in need of Government protection.

tunku : they think they can get Tun Dr Mahathir down easily.now both the government and the opposition should bring everything they have against Tun Dr Mahathir.set up the royal commission asap.i am sure that Najib would not do so but we request him to assist in the setting up of the royal commission.Tun is waiting eagerly and wants no cover up or protection at all.only liars are afraid of the truth.bring them on.....

I like Tun's No.10 statement, perhaps should also have:-

No.10(b) Lim Kit Siang must provide documentary proof of any sum that Mat Bain alleged I had burned.

It is now up to Najib how he is going to handle the issue. If I may contribute my thought, It is an attempt by the government of Singapore to destablise further BN's position.

They can stop publishing the book written by Wain as it will certainly provoke its neighbouring country. But they keep quite on the name of freedom of speech.

If the publisher in Singapore carry on publishing the book and Wain fails to show evidence how he arrived at the figure of USD100b or RM100b that clearly shows what I said in the above paragraph.

If he claims the 'wastage' is due to the physical development of the country, then prove to us that Singapore government do not have any 'wastage' in the name of development.

In construction industry, even you want to lay tiles in a given space, there is unavoidable wastage. So Wain has to be precise of what he said in the book or he just take any figure that he feels good to impart hatred against Dr M.

Again. it is now a test on Najib's term on how he is going to handle the situtaion. My bet is that he didn't dare to critise the government of Singapore as well as to ban the book being distibuted in Malaysia.

My suggestion is that we should critically look into the data published in the book and make a good argument academiccalyy to counter those allegations.

Assalamualaikum,
Tunku, This is remembering me to the another one leader so called 'Anuar de Facto of PM. Tun M bravely want to release the book eventhough,but Anuar "bravely" want to stop/delayed his case towards Saiful. So who is the real leaders hahahhahaha

calculating the wastage.....is that the case?

ohh...! I would happily meet this guy in court.... hehehe

They obviously failed to scale their intellectuality against Tun.

A million salutes to Tun Dr M - my favourite leader.

He still has the SPINE which most politicians lack.

Way to go Tun, we KNOW you are in the right all this while.

Malaysia's enemies have never been able to get pass Tun.