As Usual Nik Aziz Use Religion For Politics 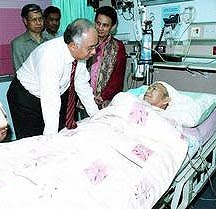 KUALA LUMPUR, Nov 30 (Bernama) -- Tan Sri Muhyiddin Yassin said the Kelantan Menteri Besar's intention to seek divine help to destroy the future of Prime Minister Datuk Seri Najib Tun Razak and Umno if the federal government refused to give oil royalty to Kelantan was a big mistake in terms of religion.
The Deputy Prime Minister said he found it difficult to understand how a person said to be a religious expert could voice such a thing, more so against a leader of the same faith and race.
"I cannot advise him (Datuk Nik Abdul Aziz Nik Mat) because he is more knowledgeable than me (concerning Islam). But such a stand should not have been made by a person who is said to be a religious figure.
"Maybe he (Nik Aziz) is more a politician and is trying to use religion for political ends ...peddling religion for political interests. This is something I cannot fathom," he told reporters Monday when asked about the remarks by the Kelantan Menteri Besar.
Earlier, Muhyiddin, who is also Umno deputy president, had opened the Local Authorities Convention and National Union of Local Authorities Employees' biennial convention at the CIDB Convention Centre here.
According to the Deputy Prime Minister, the attitude of Nik Aziz, who is also PAS spiritual advisor, did not reflect that of a religious person who erstwhile had been held in high esteem for his piety.
"All my life I have never heard of people praying for the destruction of others, especially people of one's own faith and race. I think this is against the teachings of Islam, I do not know what the punishment is. Maybe religious experts do," he said, adding that it was typical of PAS leaders to manipulate religion in their political interest.

tunku : only satan will pray for others destruction and you can guess what nik aziz is. a true Muslim knows that it's wrong to pray (doa) for others destruction but nik aziz have special permit to do so. he is exceptional material, he even have an imaginary friend named 'Kolonel Mat'.the senile old man is for sure more a satan than a human being.God is great, we can see that he is on the way of self destruction because of his own 'prayers'.
Posted by tunku at 12:00:00 AM