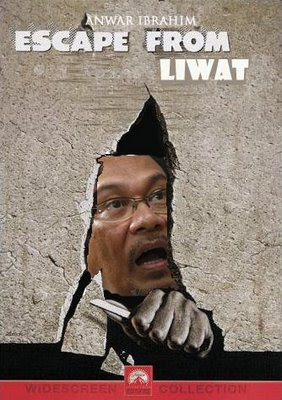 BUTTERWORTH: About 25 PKR Youth members and supporters staged a peaceful demonstration outside the Seberang Jaya mosque near here on grounds that the sodomy court case of their leader Datuk Seri Anwar Ibrahim must be heard simultaneously at the Syariah Court and the civil court.
PKR Youth chief Shamsul Iskandar Mohd Akin said this demonstration was in response to the Minister in the Prime Minister’s Department Datuk Seri Nazri Aziz recent statement in Parliament that the trial of the sodomy case in the Syariah Court was postponed.
Shamsul Iskandar claimed that similar demonstrations were also carried out after Friday prayers nationwide and it would continue until Anwar’s civil trial proceeding begins on Jan 25, next year.
‘‘We have printed two million notices which will be distributed to the public after the (series) of demonstrations on why the civil trial is regarded a mockery,’’ he told reporters at the scene here.
‘‘We believe that the statement made by Nazri is undermining the sovereignty of the Syariah Court where the court now seems to be subservient to the civil courts,” he said.
He said the Syariah Court and the civil court cases should run parallel.
‘‘It is ridiculous of the Government to want to delay the Syariah Court hearing while the civil court is asked to expedite its case.’’
He said the Umno led Barisan Nasional should focus on the economy rather than punishing political opponents.

tunku : i think there must be some typo error with the news.it should be at least 2500 if not 25000 people hold demo for anwar the moron.only 25......it's hard to believe moreover it is in the his state but why not because those 25 fools still in the cloud, others they know that anwar is a sodomizer.the pkr youth chief moron said that the BN should focus on the economy rather than punishing political opponents, we hope they do the same in the states they are ruling as they are not focusing on anything except of punishing the political opponents.walk the talk morons.
Posted by tunku at 1:55:00 AM

it will be interesting if it were tried in syariah court.

Anwar thinks he can get away with the absence of 4 witness. Let him pursue that and see who is the fool.

No such thing in the Quran regarding the need for 4 witness for zina.
It's impossible and if there were, then the 4 witness will be guilty of subahat (or skodeng?)

4 witness is for lewd act in public