Labelling Tun Mahathir As Racist Is Being Extreme, Says Muhyiddin 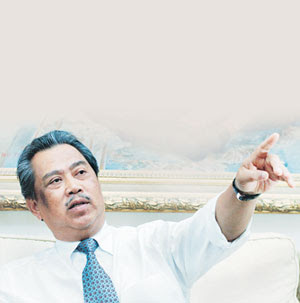 TOKYO, Dec 8 (Bernama) -- Deputy Prime Minister Tan Sri Muhyiddin Yassin said that it is rather extreme to label former prime minister Tun Dr Mahathir Mohamad as a racist.
He said Dr Mahathir had contributed significantly to the country and was still capable of giving ideas.
"So, to label him as a racist is rather extreme. He (Minister in the Prime Minister's Department Datuk Seri Mohamed Nazri Aziz) is my friend too but I don't know how it (labelling Dr Mahathir) could have come about. Under the country's political situation today, many people can misinterpret," he told Malaysian journalists here.
Muhyiddin, who is currently on a special trade and investment mission to Japan, was commenting on the statement by Mohamed Nazri Monday labelling Dr Mahathir as a racist for defending the National Civics Bureau's curriculum module.
Dr Mahathir had earlier felt that the government should not be trapped by the opposition's political game to the extent of revamping the curriculum module which had been adopted by the bureau in the country effectively all this while.
Muhyiddin said everyone, especially the leaders, should not be trapped by the opposition's strategy to the extent of quarrelling among themselves.
He said it would be better if everyone would adopt the 'talk less' approach.
"Ideally, we should not be seen as debating openly. I feel there is no need to debate or enter into polemics on government agencies such as the BTN (National Civics Bureau)," he said.
The Deputy Prime Minister said that since capturing several states in the last general election, the opposition coalition had a strategy to discredit all government institutions including the Malaysian Anti-Corruption Commission (MACC), the Royal Malaysia Police, the Royal institution, or even the National Civics Bureau so that the people would have a negative perception of the government and the leaders.
"This is their strategy. All this while we had never debated on such matters. The BTN is for the good of the country and not meant to bring any adverse effects on the nation," he added.

tunku : the dpm has spoken now we awaits the pm to comment on bloody nazri's remark on Tun Mahathir.muhyiddin is right, when there are so many issues involving the opposition,they try to divert the issues to something else which is not an issue but morons like nazri trapped in it.Najib should give stern warning to it's minister who act like a moron.they tends to forget what went wrong in the last general election.with the next GE coming, if things like this are not resolved, then danger awaits them.
Posted by tunku at 8:13:00 AM

tunku,
1. First of all, nazri should not be in the minister since he so coward to defend the malay rights as a race and muslim.
2. Nazri seems to be a proxy of anwar after zaid ibrahim.
3. BN should not have a minister that is flip flop after a gertak from the oppositon. The minister should defend by all means by providing straight forward explanation.
4. Nazri should not be in pm cabinets as his views always not on par with malay and muslim as whole; he is celupar as well.

Dr Mahathir is the oppositions number one asset. Get rid of him and the votes will flow back in like a river.

wenger,
last GE had shown everything and you still in denying mode like your boss who you lick everyday.what to do his father in law has taught him and people like you like that.
get rid of kj and UMNO will last long.

Wenger J Khairy: Five states lost to the opposition and its all because of KJ being the "PM" of Malaysia instead of his father in law.

How much KJ pays U?

DS Najib please advise your minister in the PM Department to be more careful in giving out statement. Nazri is not important but the people is.

Without Nazri the government still function.

Yes UMNO is a racist party and i am proud of it!.

wenger,
first of all bukit gantang and selambau is opposition hold,thanks for yor boss's father in laws way of ruling the country together with your boss.
batang ai was always bn's strong hold,so is bagan pinang.
get your coordinates right because your coordinates are in wrong position because too much of kj's money in your blood.

yes umno is racist party! Im also pround of it and so what? can sombody tell nazri he is bloody bastard! Dzul pekida melaka

Wenger J Khairy, you were praised for starting a fundraising project but now you have destroyed the premature goodwill with your toxic and arsenic comments.

This bloody idiot NAZRI is a lap dog of DAP and PKR just like his good friend Zaid Ibrahim.He should **** off from UMNO and join either DAP or PKR.