Najib comment on chicken rice for lunch but not on nazri's remarks. 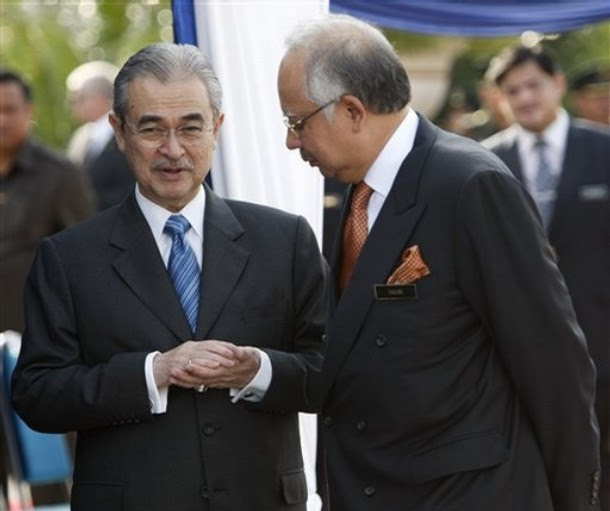 PUTRAJAYA: Despite his tight schedule, Prime Minister Datuk Seri Mohd Najib Tun Razak still manages to find time to update his Twitter and Facebook Fan Page, ensuring that his fans, friends and Netizens can keep in contact with him regularly.
An aide in the Prime Minister's Office disclosed that Najib regularly "twits" and updates his Facebook status.
The prime minister has also personally asked members of his Facebook Fan Page to suggest ideas on what type of activities they can do together next year.
"He (Najib) has personally asked for suggestions via Facebook to get ideas on activities that the fans and he can do together in 2010 to roll out some programmes to communicate with his fans.
He is looking forward to getting new ideas and feedback from the fans," the aide told Bernama.
Currently, Najib's Facebook status states: "Dear friends, I have been taken aback by the continued interest you have shown in my updates on this page.
"As a result, I would like to interact more closely with you, so that we can learn from each other. I invite you to share with me practical suggestions for improving our interaction, whether online or events/programmes. Feel free to be as innovative as you like! I look forward to your comments."
His fan site, which was launched on Nov 16, has been well received by Netizens and Facebook users as it reached more than 50,000 fans in just three weeks.
His latest update, which was done at midday, stated, "NajibRazak: Just finished recording a special video message. Now having chicken rice for lunch."
In a space of three hours, it had received 132 comments with 156 people stating that they liked the update.
The prime minister has also communicated his thoughts on his recent trip to Thailand: "Concluding Thailand trip today with historic joint visit to Narathiwat. Visit to include schools and a handicraft village."
As well as: "I will look forward to working with Thai PM Abhisit Vejjajiva during joint visit to the Southern Province Narathiwat."
On the whole, each of Najib's updates receives some 100 to 200 comments.
At times, Najib even takes time to update his thinking and activities a few times in a day, reflecting his keen interest in staying connected with his fans.
Netizens interested in knowing the prime minister's latest thoughts and activities can access them at 1Malaysia.com.my

tunku : it is getting clear on why nazri is so brave to attack Tun Mahathir and any other Umno leaders as his boss has not said anything to him because he is a close buddy of his boss.najib is making a huge mistake now.THINK NAJIB before it's too late.you can comment on your twister/facebook about having chicken rice for lunch which is not important for the people but you can't tell the public what's your comment on nazri's kurang ajar remarks against Tun Mahathir.
Posted by tunku at 12:01:00 AM

I have told you. Don't expect too much from our PM. If he can comment on Dr Asri case, why can't he says a few words about the issue.

Najib is known for his takdak telor.

IS TUN DR MAHATHIR A RACIST?
YES or NO?

of course he is a RACIST. Nothing to apologize. In fact he is proud of it. Why are you being so uptight. He should wear the badge proudly.

After all there is no shame.
Why so uncomfortable Tunku. Your vigil waiting for DSN to somehow offer this huge comment is making the Mahathirists look increasingly pathetic.

Najib oh Najib... this will be your biggest blunder and the start of your downfall...


PETALING JAYA: Datuk Seri Naz­ri Aziz said he is bringing a closure to the stormy episode over the National Civics Bureu (NCB) issue that had him crossing swords with former Prime Minister Tun Dr Mahathir Mohamad.

The Minister in the Prime Minis­ter’s Department was summoned to Datuk Seri Najib Tun Razak’s office in Putrajaya early yesterday for a meeting over the issue.

He declined to elaborate on what transpired between him and the Prime Minister but said he had given his word that he would not speak any more on NCB or argue about it with Dr Ma­­hathir.

tunku : case closed.at last najib did something about it but we hope the bloody nazri will not do it again, not just for the btn issue only.

Your blog's posts are very awesome, i enjoyed the posts of your Blog while reading,Thanks for sharing such a wonderful blog.. Events O2 arena