Ean Yong hits out at police....boss under investigation. 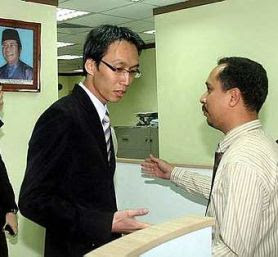 PETALING JAYA: Political aide Teoh Beng Hock’s former boss has hit out at the police for initiating a sedition investigation against Penang Chief Minister Lim Guan Eng for suggesting that Teoh was murdered.
Calling for the police to stop its investigation on Lim immediately, Ean Yong Hian Wah, the Seri Kembangan assemblyman, described the move as being politically motivated to prevent the truth about Teoh’s death from coming out in the open.
Since the Home Ministry played a role in the matter, he suggested that minister Datuk Seri Hishammuddin Hussein provide an explanation to the rakyat on the investigation.
Ean Yong said what the rakyat saw was the government trying to hide something including delaying the investigation process for the death inquest, and refusing the setting up of a royal commission to conduct an independent and fair investigation into Teoh’s death.
The Selangor state exco said Malaysians did not believe that Teoh’s death was a suicide, adding that the government could not influence the people’s perception.

tunku : when it come to others it's politically motivated, but when it comes to them it's democracy.democracy my foot.the whole thing is politically motivated.the death is just a simple suicidal death but because of politics(the way they want it) the labelling it murder.why ean yong wants to hit out at the police, the police is doing their work base on laws and regulations.they did not throw guan eng behind the bar yet without investigating.the police has the right to investigate guan eng under sedition as the case is in the hand of the court and guan eng is giving his verdict like the law of the country belongs to his father.by right guan eng is held under ISA but the government is too "SOFT" with the opposition at the moment.
Posted by tunku at 12:18:00 AM

tunku,
1. Yes, the current government is very weak. We should call our home ministry as Amaran Ministry. What a shame indeed!
2. The police should take action to those people that orally or verbally trying to prevent the police to carry out their investigation.
4. Ean is acting like gengster as if Malaysia belongs to his father or he is acting like a komunis. We can not allow mafia type behaviour in our society. Let a lone an MP or a chief minister.
5. Let the police do their job on LGE case. Let the people know that those big fish also could not run away with their wrongful acts. If malay comments otherwise, I am sure the whole racist groups will make a police reports instantly.
6. Hopefully, 2010 is more peaceful from those komunis types of mps.

PKR mission is to discredit the police, Macc, Judiciary and promote negative perception toward government machinery. Why?

Reason: If Anwar is convicted of sodomy, they will have reason to accuse these machinery of injustice and biased.

Anwar said to promoting justice for all. Why not face the sodomy charge like a man rather like a pondan.

These people are not fit to be called Malaysians.

If ever Malaysia wants to continue to attract foreign investment
must believe in the three Cs. C1- Cnsistency,C2- Clarity & C3- continuity. There must be consistent application of the law based on clear guidelins and continuity provided by a stable government.Ramals

Cops to call up rep over ‘intimidation’

KUALA LUMPUR: Seri Kembangan state assemblyman Ean Yong Hian Wah is to be called up by the police over a statement he had made which allegedly intimidated the police.

“I wish to stress that the Honourable Member should not try to intimidate us,” he told reporters at a gathering between the people and the police, here Sunday.

He said Hian Wah would be called up soon to have his statement recorded to help in an investigation under Section 506 of the Penal Code and the Communications and Multimedia Act 1998.

Khalid had said earlier that the Penang chief minister would be questioned for claiming at the Pakatan Rakyat convention in Shah Alam on Dec 19 that Selangor political aide Teoh Beng Hock, who died after a fall at the Plaza Masalam in Shah Alam, was murdered. - Bernama