Budget’s slim approval should be a lesson: Pandikar 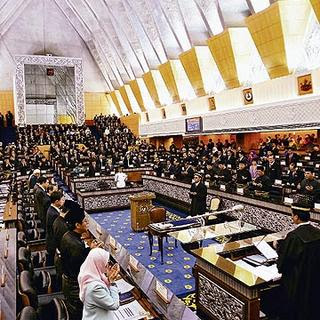 KUALA LUMPUR: The Supply Bill 2010 which scraped through with a majority of three votes at 11.20pm on Monday should serve as a lesson to both Barisan Nasional and the Opposition Members of Parliament, said Dewan Rakyat Speaker Tan Sri Pandikar Amin Mulia.
He said Barisan MPs should not take it for granted that all Bills would be passed without problem even if they skipped attendance in the House.
Pandikar also questioned the move by Opposition MPs in attempting to defeat the Budget.
“We have almost come to the end of the Budget debate. What is your motive for doing that? What can you achieve with that? Do you want a fresh election?” said Pandikar Amin.
While the national budget has always been passed without any glitch since Independence, Budget 2010 was passed with only three majority votes on Monday, posing the risk that allocations and expenditures prepared by the Government for next year could have been stalled if the Opposition had got its way, he said.
In western countries, Pandikar Amin said such an event could have meant a fresh election as failure to approve the national budget was tantamount to a vote of no-confidence in the government of the day.
Minister in the Prime Minister’s Department Datuk Seri Nazri Abd Aziz, who is also deputy whip, cautioned backbenchers to not “push their luck.”
The House is made up of 140 Barisan MPs and 82 Opposition MPs.
However, the bloc division requested to pass the Budget saw only a result of 66 for versus 63 against.
Prime Minister Datuk Seri Najib Tun Razak, who was attending the Chung Hwa Independence School anniversary dinner at Jalan Ipoh, rushed back to Parliament when Nazri sent out a “distress call” at 8pm.
The presence of a large number of Opposition MPs, including PKR adviser Datuk Seri Anwar Ibrahim, DAP parliamentary leader Lim Kit Siang (DAP-Ipoh Timur), Tan Kok Wai (DAP-Cheras) and PAS president Datuk Seri Hadi Awang (PAS-Marang) late at night had alerted Nazri that something was up.
Anwar declined to answer when asked if it had been a pre-planned move by the Pakatan Rakyat to defeat the Budget.
“It will force them (the Government) to respect the Dewan and put them on the guard at all times,” he said.
PKR strategic director Tian Chua (PKR-Batu) however said it had been a “planned mission.”

tunku : definitely it was a planned mission by anwar but it was a good thing as now the BN mps won't take things for granted especially those who did not attend the sitting without reason.bn should make sure that every time there is a sitting,there should be at least 82 of its members sits in the parliament.lesson well learned.many don't know that such an event could have meant a fresh election as failure to approve the national budget was tantamount to a vote of no-confidence in the government of the day.my suggestion is that the parliament should follow office hours only(like macc interrogation's timing).mp's are human too and have many other responsibilities or urgent matter to attend to.so only office hours for them in the parliament.

are you serious ? that parliament meets during office hours?

then what the xxxx do the rakyat pay them high salaries and allowances for? i hope you are not suggesting this just because the BN nearly got embarrassed? they made a mistake in making the MP behind the PKFZ fiasco as the BN backbenchers chief. Najib should replace him immediately. Or does he dare do that? I doubt it, after having described Sarawak and Sabah as BN's fixed deposits.

why not anon?
if macc forced to to that by the pakatan, why not the parliament?

about, bn backbencher chief, he is not found guilty yet, so why want to replace him now? why don't opposition change their leader as he is too having the sodomy fiasco????

Whether they are well planned or not, they are obviously well organised compared to BN MPs and Backbenchers...

This is not the 1st time it happened. Last year >> http://mantra-indeeptots.blogspot.com/2008/05/pak-lah-and-rat-race.html

... that happened during office hours!

tunku.
1. It was a pakatan ploy to defeat the current goverment through legal methods.
2. This was a good lesson as a thief always finds loophole to steal or break a law.
3. All those bn mps that did not attend the budget meeting without having formal functions or solid reason should be not given the chance in the next GE. It was their responsibility and the people pay their salary and allowance.
4. What a pity that we need to go for the election just because the stooges did not carry out their duties to the people expection.
5. I think all the mps should find out what is the best arrangement to avoid this repeat in the future be it in office hour or cramp it to alternate weeks.

bloody nazri should be a toilet taker rather then parliment no doubt..dzul pekida melaka